Awadhi cuisine is an indigenous part of the city of Nawabs, Lucknow. The dishes and cooking style of this city is inspired and influenced by the Mughals. The cuisine includes both vegetarian as well as non-vegetarian dishes prepared with exotic spices, herbs and garnished with dry fruits. The need for such a cuisine arose as the emperors, the Nawabs of Awadh, being inhabitants of Persia, were used to a certain type of diet which comprised of grains, dry fruits, fruits and vegetables available in that part of the country apart from various forms of meat. This style of cooking was further polished by the Nawabs by adding exotic flavours of saffron and other Indian spices.

The cuisine also bears similarities to the cuisines of Central Asia, some parts of Northern India and Hyderabad. The city of Lucknow thus became popular for its Nawabi cuisines. The chefs and cooks of the region invented the dum style of cooking or the art of cooking over low heat, which has become popular and synonymous with the city today. The city has an elaborate menu consisting of kebabs, kormas, roomali roti, warqi roti, zardi, biryanis and many more.

The Zarda is a perfect example of fusion dish as the basmati rice is used and it is converted into a delightful savoury. With lots of dry fruits and cherries, it is made with the special basmati rice which is flavoured and cardamom sugar syrup is added to it. The saffron colour as the saffron is also mixed to give a refreshing and amazing taste. It is a rare dish which most of the people have not heard off. It is a delicacy which you should try when you are in Lucknow and can make it at home as well.

The Murgh Mussallam can be described as a perfect example of Persian flavours mixed with the Awadhi style of cooking. Murgh Mussallam is a whole, roasted chicken cooked in masala. The dish was popular among the royal families. It has also been described as the favourite dish of Muhammad bin Tughluq. The chicken is marinated for hours and then stuffed with boiled eggs. The chicken is then further cooked with chilli, cardamom, cinnamon, saffron, cloves and poppy seeds and garnished with dry fruits and edible silver foil also known as vark.

Now talking of the kababs, they are also an example of Persian flavours mixed with Awadhi style. Earlier the kababs were simply small pieces of meat roasted over fire called boti kababs. Later with innovations and improvements were born Shammi kababs, Galouti kababs and Kakori kababs.

The Seekh kababs have been an inseparable part of the Awadhi cuisine for a long time. The dish was introduced by the Mughals and was originally prepared with beef mince on skewers cooked to perfection on a charcoal flame. Later the tenderness of the lamb mince replaced the beef mince in the dish giving the kababs a new dimension altogether.

Tunde ke Kabab, a yet another delight, is prepared with minced meat which is popular in Lucknow. The dish was the speciality of a one-armed chef hence, the dish got its name Tunde ke Kabab. The dish is believed to be over 100 years old and claims to be unique because of the secret recipe for the preparation of the masala. The masala is said to infuse flavours of over 160 spices.

Shami Kabab can be spotted at all places in Lucknow from street vendors to high-end restaurants. To make this delicacy at home start with the preparation of a mixture comprising of minced meat, ground chickpeas and spices. Usually, an egg is added to the mixture for binding i.e., to hold the mixture together. A small patty is formed of this mixture which is then pan-fried and served hot with mint-coriander chutney. In a vegetarian version of the kebab replace meat with paneer or potatoes.

Korma stands for cooked meat in Urdu. The dish starts with the preparation of a spice sauce comprising of yogurt, cream, nut and seed paste. Then meat or vegetables are added to the sauce and allowed to simmer until cooked. Traditionally, the dish was prepared on a pot set over a very low flame with charcoal on the lid to provide heat from all sides. The term Shahi used for the delicacy symbolizes its status as a royal dish and its association with the emperors and the court.

Pulao is prepared by cooking meat in ghee with aromatic and exotic spices, allow the meat to cook in water on a low fire until soft and tender. Add rice and further cook it in a sealed pot over low heat. With biryani the cooking technique is a bit different. Here the rice is separately boiled or parboiled in spiced water and then layered with meat curry which is then sealed and allowed to cook over a low flame.

Apart from the Awadhi cuisine the city also boasts of its desserts. Makhan Malai served here is one such dessert. Makhan Malai is a flavourful winter sweet sold here. It is an airy and fluffy dish with a creamy texture. It is served with a sprinkle of khoya and dry fruits and decorated with edible silver foil. The street is full of vendors selling this sweet, to find which one is the best reach out to the vendor with the least makhan malai left.

Other things to indulge in when in Lucknow, is the traditional Handi Chicken. The dish is prepared by cooking rice, spices and chicken on low flame for hours until cooked. The handi is served packed to the customers.

Warqi Paratha or layered paratha serves as an ideal combination with curries. Street food forms an integral part of the city. Lucknow is famous for its street food with samosa and chaat being the city’s favourites. The popular ones among the people here are Matar ki Chaat served with aloo tikka and Dahi bhallas.

Wheat is the staple food of the state hence breads form a major part of the diet here. One can find rotis and breads which are made in different ways some of them are rumaali roti, tandoori roti, naan, kulcha, lachha paratha, sheermal and bakarkhani.

And finally, end one’s food safari with the Lucknowi Paan and Kulfi Faluda. The faluda is available in different flavours like almond, elaichi and many others. 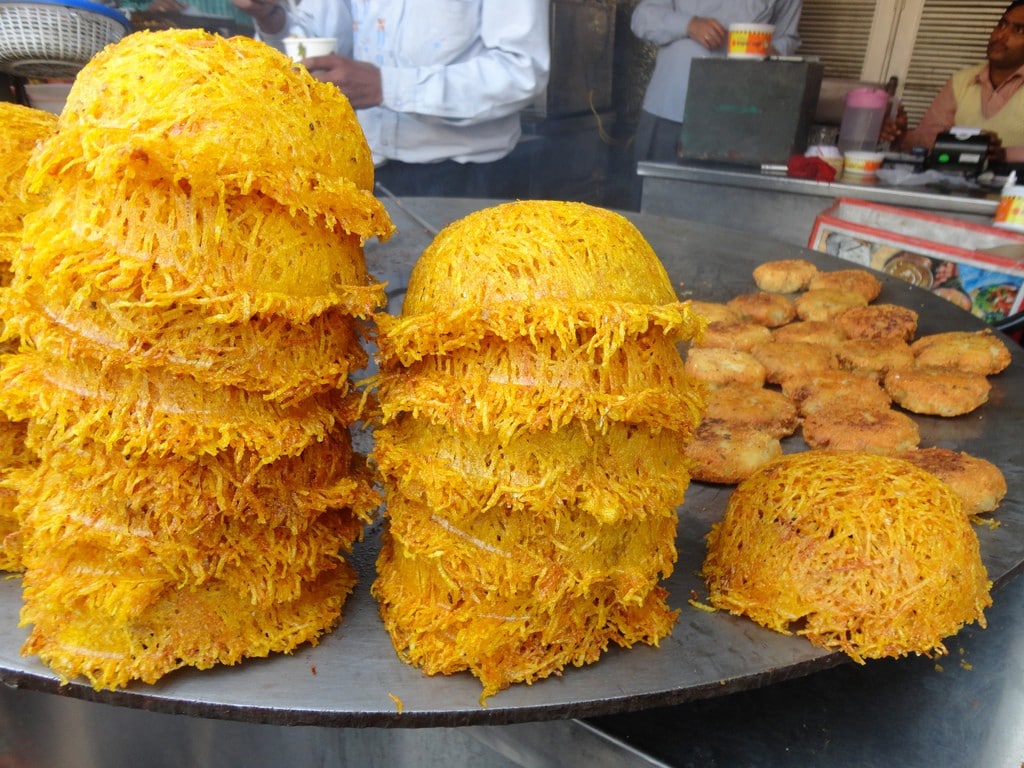 The city provides you with an umpteen number of food options and for a comfortable stay book, you stay here.