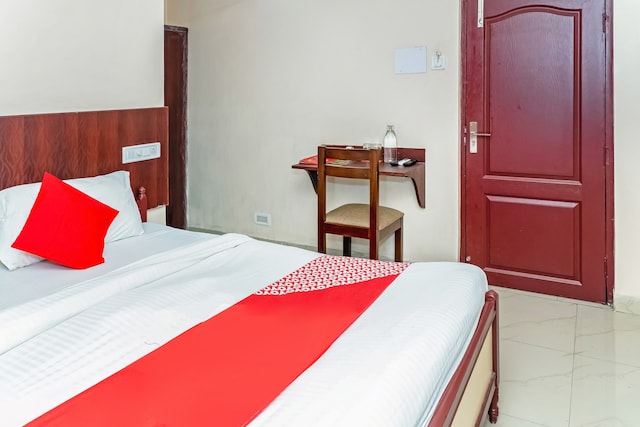 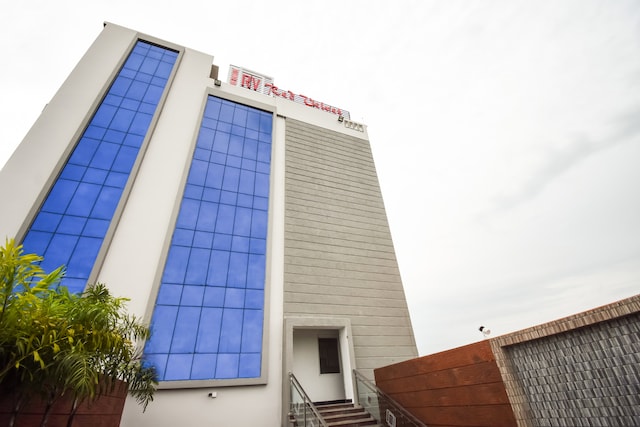 Gajapati Nagar, Bhubaneswar· 5.1 km
700+ people booked this OYO in last 6 months
4.1 (696 Ratings)·Very Good
Hair Dryer
Parking Facility
Free Wifi
+ 11 more
Sanitised b4 ur eyes
₹1033₹245857% off
per room per night
Get access to exclusive deals
Only the best deals reach your inbox
Your email
123456
Put your foot down in ‘The city of Temples’
Bhubaneswar is situated on the seaside fields of Odisha toward the south-west of the river Mahanadi. It encounters tropical climate conditions. The best time to visit Bhubaneswar is from October to March when the climate is wonderful and the temperature is appropriate to travel. During this time visitors can likewise partake in the Ekamra Utsav, which is held in the period of January. Known as 'The City of Temples', Bhubaneswar is one of the first planned urban areas situated in the eastern part of India and is a flourishing focus of craftsmanship and culture. Actually, Bhubaneswar means Lord of The universe and is known for its temples and sanctuaries. Bhubaneswar is one of the 3 urban communities planned by the German Architect Otto. H. Koeingsberges alongside Chandigarh and Jamshedpur and is one of the primary arranged urban communities in Modern India.
The most problematic part of a trip is to go about searching for a hotel. But hotels in Railway Station Bhubaneswar are easily available with OYO. 5 km from Bhubaneswar Railway Station, Brahmeswara Temple is a renowned Hindu sanctuary situated in the sanctuary city of Bhubaneswar. It is one of the heavenly places to visit in Bhubaneswar and among the best places of legacy in Orissa.
Brahmeswara Temple is famous for its creative models, particularly for the figures in the pinnacle and patio of the sanctuary. Tantric related pictures are additionally set inside this sanctuary. At a separation of 4.5 km from Bhubaneswar Railway Station, Bindu Sagar Lake or Bindu Sarovar is a sacrosanct lake situated toward the north of the Lingaraja Temple and toward the east of the Ananta Vasudeva Temple in Bhubaneswar Odisha. It fills in as a prominent outing spot and furthermore one of the top spots to visit in Bhubaneswar. At a separation of 12 km from Bhubaneswar Railway Station, Dhauligiri Hills is a recorded site situated on the banks of River Daya in Bhubaneshwar. It is one of the most well-known Tourist Places in Bhubaneswar and furthermore one of the significant spots of legacy in Odisha. An old Hindu sanctuary committed to Lord Dhavaleshwar is situated past the stupa. Saddharma Vihar Monastery, the old models and changed exceptional works of art are likewise situated at the site.
Enjoy a Lavish Stay while on vacation
The very modish and contemporary hotel, OYO 9010 Hotel Railview is located just near the Bhubaneswar Railway Station. OYO Railway Station Bhubaneswar hotels are spacious and well-decorated with modern fittings. This place is a convenient staying place as each room comes with an AC, TV, free WiFi, and a queen-sized bed. You will get other facilities like parking, CCTV cameras, power backup, and card payment facility. Well-known eateries like Chai Buddy, Aaharam, etc. are close to the hotel. Book a cab and go nearby places like Nandankanan Zoological Park, The ISKCON Temple, Lingaraj Temple and also the beaches of Puri i.e. 40km from the Railway station. The travellers can also experience the comfort and reliability of home away from home in Bhubaneswar at OYO 2338 Hotel Pelican. The rooms are equipped with a wardrobe, curtains and upholstery. The exquisitely designed false-ceiling adds to the charm of the room and matches with the décor. The dining room is well-lit, spacious. The hotel also offers parking facility to the guests. The hotel is in close proximity to the tourist attractions and local markets, serving both the tourists and business travellers.
You can explore homestays in Bhubaneswar for a memorable trip.
Read MoreRead Less
Download OYO app for exciting offers.
Download on theApp StoreGet it onGoogle Play
About UsTeams / CareersBlogsSupportOfficial OYO BlogInvestor RelationsOYO CircleOYO Frames
Terms and conditionsGuest PoliciesPrivacy PolicyResponsible DisclosureTrust And Safety
Feeling lucky? Try out a random OYO. Find OYO
Have Queries ? Call for any assistance on 0124-6201600
OYO Townhouse
Your Friendly Neighbourhood Hotel
OYO SilverKey
Executive Stays
OYO HOME
Unlocking Homes
HOTELS BY CITY
Hotels near meHotels in GoaHotels in PuriHotels in MahabaleshwarHotels in OotyHotels in JaipurHotels in ShimlaHotels in ManaliHotels in UdaipurHotels in MussoorieHotels in PondicherryHotels in DelhiHotels in MumbaiHotels in NainitalHotels in LonavalaHotels in MunnarHotels in BangaloreHotels in MysoreHotels in DarjeelingHotels in Mount AbuHotels in KodaikanalHotels in HyderabadHotels in PuneHotels in ChandigarhHotels in ShirdiHotels in AgraHotels in GangtokHotels in CoorgHotels in ChennaiHotels in TirupatiHotels in DalhousieTravel GuideAll Cities HotelsCoupons
MOST POPULAR HOTELS
Hotels in HaridwarHotels in KolkataHotels in AhmedabadHotels in ShillongHotels in RishikeshHotels in VaranasiHotels in AlibaugHotels in MandarmaniHotels in SaputaraHotels in DamanHotels in OotyHotels in YercaudHotels in AmritsarHotels in MaduraiHotels in CoimbatoreHotels in KasauliHotels in DehradunHotels in DharamshalaHotels in GuwahatiHotels in LucknowHotels in McleodganjHotels in KatraHotels in Port BlairHotels in IndoreHotels in JaisalmerHotels in JodhpurHotels in PachmarhiHotels in VijayawadaHotels in TrivandrumHotels in Vizag
2013-2022 © Oravel Stays Limited