Fri, 7 May–Sat, 8 May
1 Room, 1 Guest
Login / Signup
Please check the travel advisory issued by the concerned state government/local authorities before booking, as some places may have COVID-19 related travel/lodging restrictions.
Filters
Clear All 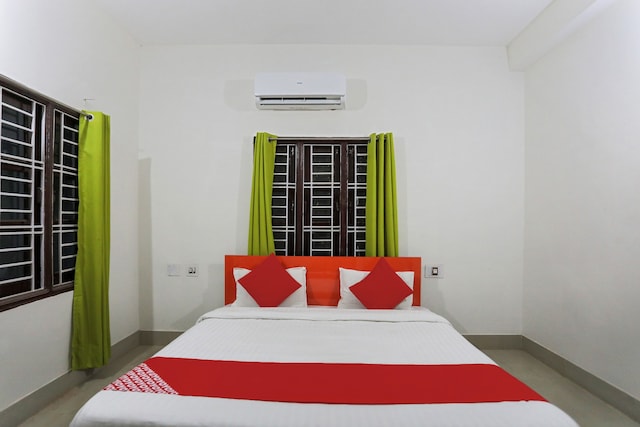 Near Budheswari Colony, Nilachakra Ln, Bhubaneswar· 4.4 km
4.5 (486 Ratings)·Excellent
Reception
Free Wifi
Geyser
+ 9 more
Sanitised b4 ur eyes
₹1354₹257947% off
per room per night
Log in now to unlock exclusive deals
Enjoy up to 15% extra discount on your bookings
Login

Near Airport,New forest park road,Bhubaneswar · 4.7 km
3.9 (109 Ratings)·Good
Reception
Free Wifi
Power backup
+ 20 more
Sanitised b4 ur eyes
₹1514₹313051% off
per room per night
Get access to exclusive deals
Only the best deals reach your inbox
Your email

Near Infocity, Kaustav College, Patia· 5.0 km
4.3 (304 Ratings)·Very Good
Reception
Power backup
AC
+ 23 more
WIZARD MEMBER
Sanitised b4 ur eyes
₹1216₹231547% off
per room per night
Get access to exclusive deals
Only the best deals reach your inbox
Your email
1234567891011
Bhubaneswar was once called the ‘Temple City’, and it still has a number of famous temples with intricate carvings and nuances. The city is an enthralling pit stop for a weekend getaway.

The old city’s holy centre located around the ceremonial tank called Bindu Sagar is definitely one of the places tourists should visit. It is in this area that about a thousand medieval stone temples once stood. The number has since dwindled to around 50. The city has seamlessly integrated its rich cultural heritage with a regional economic base. Founded during the Kalinga rule about 3,000 years ago, Bhubaneswar boasts of magnificent temples. The Khandagiri and Udayagiri caves are among the best tourist destinations in the city. Situated a few kilometres west of the heart of Bhubaneswar, the hills are riddled with rock-cut shelters. Some of the rock shelters have been ornately carved. The shelters are thought to have been carved for Jain ascetics in as early as the 1st century BC. When one ascends to Udayagiri (Sunrise Hill), keep an eye out for Swargapuri (Cave 9) which is located to the right of the devotional figures. Khandagiri offers tourists picturesque views of Bhubaneswar from its peak. The right path to the hill leads to Ananta Cave (Cave 3), which has carvings of athletes, women, elephants and other motifs.
There are quite a few Jain temples in the vicinity as well. If one is interested in tribal art, a visit to the Museum of Tribal Arts and Artefacts is a must. One can find tribal dress, weapons, ornaments, and items displayed at the museum. The museum is situated off NH-5. The State Museum houses the state’s best collection of rare palm-leaf manuscripts, in addition to patta-chitra (scroll paintings). It also is home to traditional and folk musical instruments, armoury, as well as an impressive selection of Buddhist, Jain and Brahmanical sculptures. A trip to Bhubaneswar can be made anytime in the year. However, avoid visiting during the summer months as temperatures over the 40-42 degree Celsius mark. The best time to visit would be between October and March. In February, one can visit the city for Shiva Ratri.

Accommodation in Bhubaneswar by OYO

Choosing the right premium or budget hotel is always a challenging task. Sometimes, it can also get quite overwhelming. How can you tell if the hotel will live up to the hype it projects on its website, and more importantly, will the hotel be the right fit for you? With OYO rooms, you can be assured of staying in the best hotels possible. There are OYO hotels near Cuttack Road and the railway station. You also have the option of choosing accommodation near Biju Patnaik International Airport or Nandankanan Zoological Park. Other destinations where OYO Rooms are popular include KIIT University and Saheed Nagar. With a wide variety of tourist attractions like the world famous Lingaraja Temple ,Dhauli Giri, Udayagiri and Khandagiri Caves , Nayapalli is the place to be while in Bhubaneswar. With a number of budget and star-rated hotels near nayapalli Bhubaneswar, it also wonderfully serves its varied guests. All nayapalli Bhubaneswar hotels at OYO have umpteen facilities and high hospitality standard.
Read MoreRead Less
Download OYO app for exciting offers.
Download on theApp StoreGet it onGoogle Play
About UsTeams / CareersBlogsSupportOfficial OYO BlogPress KitOYO CircleOYO Frames
Terms and conditionsGuest PoliciesPrivacy PolicyResponsible Disclosure
Feeling lucky? Try out a random OYO. Find OYO
Have Queries ? Call for any assistance on 070651 11128
OYO Townhouse
Your Friendly Neighbourhood Hotel
OYO SilverKey
Executive Stays
OYO HOME
Unlocking Homes
HOTELS BY CITY
Hotels near meHotels in GoaHotels in PuriHotels in MahabaleshwarHotels in OotyHotels in JaipurHotels in ShimlaHotels in ManaliHotels in UdaipurHotels in MussoorieHotels in PondicherryHotels in DelhiHotels in MumbaiHotels in NainitalHotels in LonavalaHotels in MunnarHotels in BangaloreHotels in MysoreHotels in DarjeelingHotels in Mount AbuHotels in KodaikanalHotels in HyderabadHotels in PuneHotels in ChandigarhHotels in ShirdiHotels in AgraHotels in GangtokHotels in CoorgHotels in ChennaiHotels in TirupatiHotels in DalhousieTravel GuideAll Cities HotelsCoupons
MOST POPULAR HOTELS
Hotels in HaridwarHotels in KolkataHotels in AhmedabadHotels in ShillongHotels in RishikeshHotels in VaranasiHotels in AlibaugHotels in MandarmaniHotels in SaputaraHotels in DamanHotels in OotyHotels in YercaudHotels in AmritsarHotels in MaduraiHotels in CoimbatoreHotels in KasauliHotels in DehradunHotels in DharamshalaHotels in GuwahatiHotels in LucknowHotels in McleodganjHotels in KatraHotels in Port BlairHotels in IndoreHotels in JaisalmerHotels in JodhpurHotels in PachmarhiHotels in VijayawadaHotels in TrivandrumHotels in Vizag
2013-2021 © Oravel Stays Private Limited