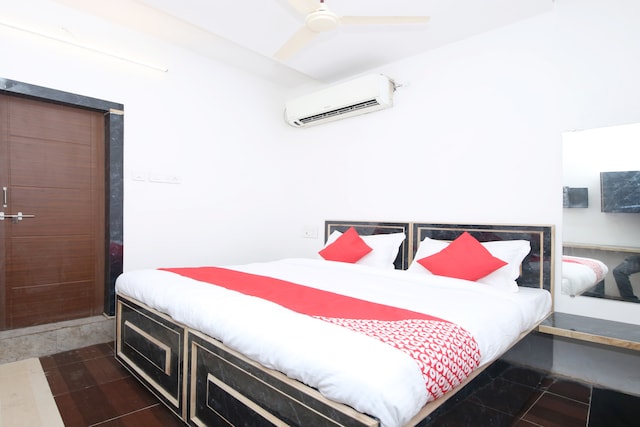 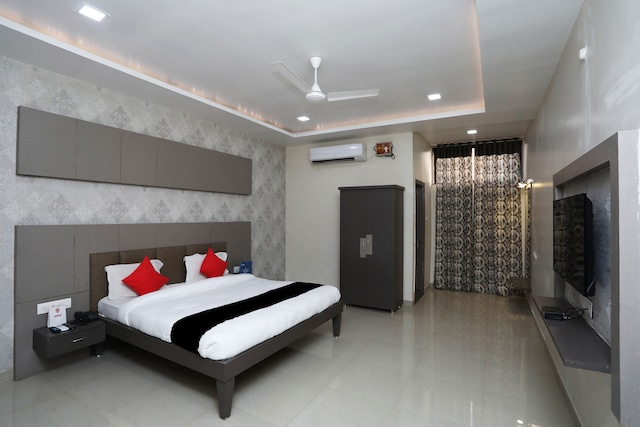 Near Railway station, Raipur· 0.6 km
NEW
Free Wifi
Geyser
Power backup
+ 2 more
₹1050₹299964% off
per room per night
Get access to exclusive deals
Only the best deals reach your inbox
Your email

Bus Stand Rd, Raipur· 2.2 km
All staff vaccinated with 1st dose
3.2 (50 Ratings)·Fair
Parking facility
Reception
Free Wifi
+ 15 more
WIZARD MEMBER
Sold Out
1
Located in the state of Chattisgarh, Raipur is the state’s capital and also the largest city here. It was earlier a part of Madhya Pradesh but in the year 2000, it became a part of Chhattisgarh when the new state was formed. It is also called the ‘rice bowl of India’ as several varieties of rice are grown here.

The best time to visit Raipur is during the winter season with the summers being very hot and humid. The months between November to February are ideal for tourists to visit the city as the weather is cool and pleasant all is ideal for outdoor activities all day long.With the River Mahanadi flowing on the eastern side of the city and dense forests being located on its southern side, Raipur is a beautiful city surrounded by nature. The Deccan Plateau is in the south of the city while the Maikal Hills are on its north-west side.

With the River Mahanadi flowing on the eastern side of the city and dense forests is located on its southern side, Raipur is a beautiful city surrounded by nature. The Deccan Plateau is in the south of the city while the Maikal Hills are on its north-west side. The Kevalya Dham is a Jain temple made of white marbles and is a major tourist attraction in Raipur. Also known as Sri Adinath Jain Shwetambar Tirth, it attracts devotees from all over the national all year round. The Mahant Ghasidas Museum and Guru Tegh Bahadar Museum are quite popular too and are great places to visit especially if you are travelling with children.
If you have some spare time in hand, then you can plan a visit to the Kanha National Park, Achanakmar Wildlife Sanctuary and Amarkantak which are all at a distance of a few hundred kilometres and will require a few hours to drive down to.

Boasting of some of the top budget hotels in Raipur, OYO Rooms are rapidly becoming the first and only choice for travellers of all types. Whether it is a holiday or a business meeting that brings you to a new city, booking an OYO Room for your accommodation automatically helps you save a great deal of money and also places you in a central area in the city. The OYO Rooms in Evergreen Chowk, Loco Colony and Civil Station Road and also near Paradise are just apt for business travellers as it is a 10-minute drive from the Raipur Railway Station allowing officials to get in and out of the city without delay. You can avail complimentary breakfast, parking and laundry services in these hotels in Raipur.
The Raipur International Airport is an almost 30 minutes’ drive from these areas with local transport being easily available for commuting to it.Moreover, the Kevalya Dham Jain Temple can also be reached from these areas within a few minutes’ drives making these OYO Rooms ideal for tourists as well. Tourists who wish to get a complete feel of the city can opt for the OYO Premium Rooms in Pandri as these Raipur hotels are not only luxurious and comfortable to stay in but also allow visitors to explore the city at their own pace while offering complimentary breakfast, parking space and laundry service to the guests.
If you are looking for some cheap hotels in Raipur, then the OYO Budget Rooms in Shastri Bazar Road, Ramasagar Para Road and Vishal Nagar are just perfect for you. These rooms offer a plethora of amenities to its guests such as laundry services and complimentary breakfast and are quite reasonably priced without compromising on the quality of service. Use OYO Coupons to get amazing deals on bookings in Raipur .
Read MoreRead Less

Showing 1 - 10 of 10
1.
What are some of the best options in Raipur?
OYO Rooms offers a great range of accommodation options from which you can choose the most suitable option for you, as per your budget structure and requirements.