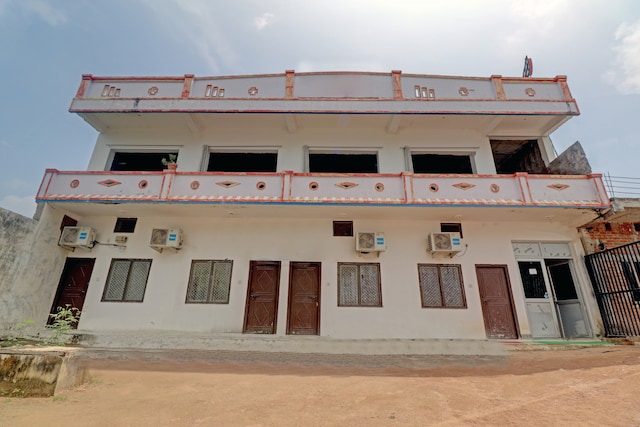 Chandela ,NH339B, Khajuraho, Rajnagar Tahseel,,Chattarpur, Madhya Pradesh, India Khajuraho Madhya pradeshindia471505· 2.4 km
3.8 (87 Ratings)·Good
AC
TV
₹699₹291276% off
per room per night
Log in to unlock exclusive deals
Enjoy up to 15% extra discount on your bookings
Login
Get access to exclusive deals
Only the best deals reach your inbox
Your email
1

Booking hotels in Khajuraho with ease

Madhya Pradesh is a land of great antiquity and home of monuments representing various periods of history. Khajuraho is known for its ornate temples that are a spectacular piece of human imagination, artistic creativity and magnificent architectural work, deriving spiritual peace.

Khajuraho, located right in the heart of Central India in the state of Madhya Pradesh, is believed to be the religious capital of Chandelas. The Khajuraho temple site had 85 temples by the 12th century, spread over 20 square kilometers. Of these, only about 20 temples have survived. Witness the glorious and exemplary architecture of the Khajuraho Temples which will surely captivate your mind and enrich your soul. The erotic art at Khajuraho is considered to represent the pinnacle of love and passion. The famous temples around the city are Kandariya Mahadeva Temple, Devi Jagdambi Temple, Chaunsath Jogini Temple, Lakshmana Temple, Chaturbhuj Temple, Javari Temple, Vamana Temple, Varaha Temple, Nandi Temple, Duladeo Temple, Parshvanath Temple, Adinath Jain Temple and Parvati Temple.

Also known as one of the world heritage sites, Khajuraho has an array of luxurious budget hotels for the comfort and convenience of the explorers and leisure travellers. Many travellers from around the world visit the city to learn about the Indian mythology and understand the legends behind these magnificent sculptures.

OYO Rooms, India’s Largest Branded Network of Hotels offers a varied range of hotels in Khajuraho. Situated near Khajuraho Bus Stand, OYO offers a wide variety of hotels under two different categories convenient for travellers looking for a budget stay in Khajuraho. Not just that, OYO also facilitates the varied range of hotels near the Khajuraho Railway Station ideal for frequent travellers. Tourists visiting the city for their devotion to Lord Shiva can stay comfortably at the best budget hotels in Khajuraho situated close to the famous Kandariya Mahadev. OYO Rooms situated at walking distance from the known Jain Temple offers accommodation within a budget is ideal for those who wish to meditate and pray in peace. Get ready to be pampered like home at the OYO hotels near Gol Market, making it one of the best budget hotels in Khajuraho. For the comfort of frequent fliers, multiple OYO hotels are situated close to the Khajuraho Airport which offers opulent services within a budget.

OYO offers long stay options in Khajuraho, apt for tourists wanting accommodation to fulfill their religious ceremonies but within a certain budget. OYO hotels located near Main Temple Road in Khajuraho are the some of the best option for pilgrims. There are numerous budget hotels in Khajuraho, for travellers visiting the city with a desire to explore the rich architecture of the city. Khajuraho is well-connected by roads as well as railways with the neighboring cities in the state of Madhya Pradesh, making it convenient for tourists to reach the city.
Read MoreRead Less