SPOT ON 72378 Krishna Market And Lodge 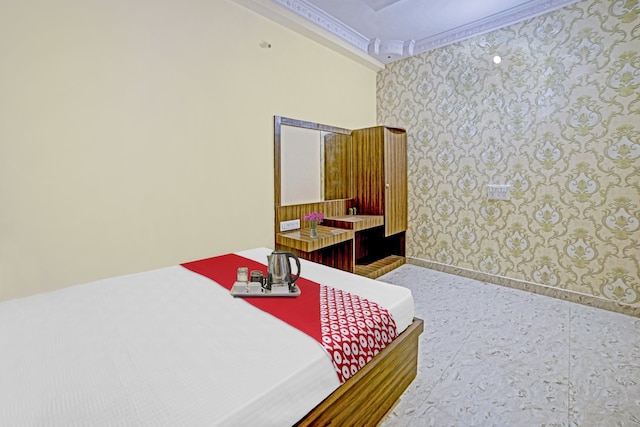 Madhya Pradesh, Jabalpur· 7.8 km
All staff vaccinated with 1st dose
2.6 (17 Ratings)·Fair
Reception
Ticket tour assistance
Public washroom
+ 43 more
Sold Out
1
Jabalpur is among eastern Madhya Pradesh’s popular city. It is known for its rich historical legacy and culture. As soon as one enters the city, they are greeted by rich natural beauty and beautiful architecture. Most tourists visit Jabalpur to visit Marble Rocks – a mighty river gorge. However, the city, which is known for its chowks and working men’s taverns, is also famous for its tiger parks, including Kanha, Bandhavgarh and Pench. No trip to Jabalpur is ever complete without a visit to Dudhsagar Falls. The waterfall is located on Narmada River in Bhedaghat. When the water plunges, it creates a mass of mist as a result of the smoke. The beautiful white marble rock formation at Bhedaghat is also a popular tourist destination. The marble from here is used across the country to sculpt stone crafts and idols. The balancing rock of Jabalpur is also a beautiful sight.
The massive Shiva statue in Jabalpur also attracts a number of tourists throughout the year. Located in Kachnar City, the 76 feet tall statue is among the tallest in India. One can get a view of beautiful open skies and nature surrounding the main statue. A visit to Dumna Natural Reserve is also a good option for nature and animal lovers. The natural reserve park is home to a small dam, forests and a host of animals including the chital, wild boar, porcupine and wide variety of birds. It is located about 10km from the city and also doubles as a scenic picnic spot. The park offers a number of fun activities for tourists to engage in like fishing platform, toy train and boating. The Hanumantal Jain Temple is also among the famous tourist places in the area. It is located on the edge of the Hanumantal and is widely regarded as the largest independent Jain temple in the country. There is another famous Jain pilgrimage centre called Pisanhari Ki Madiya. It is situated near the Netaji Subhash Chandra Bose Medical College. For anyone looking to visit Jabalpur, the best time would be between September and March. The monsoon season adds to the city’s natural beauty. A number of tourists visit the city during August and September. Never plan a trip during summer as the temperature touches the 45 degree-mark. There are a number of quaint luxury and budget hotels in Jabalpur to choose from. One can book a room near Civil Lines, the railway station, Sadar Bazaar and even Russell Chowk.
Read MoreRead Less

Showing 1 - 10 of 10
1.
What are some of the best accommodation options in Jabalpur?
At OYO it is very convenient to find affordable hotels in Jabalpur for all kinds of travelers, from students to couples and families.

Best Accommodations
Read MoreRead Less
2.
What are some of the greatest tourist attractions in Jabalpur?
Jabalpur is a great place to take a vacation with your family. Talking about some of the best places to visit in Jabalpur, here are a few - Dumna Nature Reserve, located near the airport, is a great place to check out a range of different species of birds and animals; Rani Durgavati Museum is a place of historical tourist attraction. The balancing rock of Mahabalipuram also known as ‘Krishna's Butterball,' is a must-visit the place. Apart from these, you should also check out Madan Mahal Fort, Sangram Sagar Lake, Hanumantal Jain Mandir, Chausat Yogini Temple, Lord Shiva Statue at Kachnar City Shiv Mandir, Gurdwara Gwari Ghat Sahib, and Bargi Dam.
Read MoreRead Less
3.
What is the best time to visit Jabalpur?
Though Jabalpur can be visited by tourists all around the year, winters are more convenient as compared to other seasons. The best time to visit Jabalpur is from November till February. The temperature around this time varies from 27°C and by night, it goes down to 8°C
Read MoreRead Less
4.
What is the best food that you can eat in Jabalpur?
Jabalpur is a great place to enjoy street food. The best things to eat there include aloo banda, samosa, mangoda, bhajiya, gatpat, aloo chap, fulki/panipuri, poha-jalebi, and samosa vada. During summers, some of the must-try dishes are kulfi, lassi, dahi vada, barf ka gola, mango shake, and jal jeera. The best places to try all these amazing dishes are - Baba Falahari Chat (Sarafa), Garha Road, Choti Omti area, Gupta Chat (Civic Center), Ramnath, Ram Poha Jalebi at Teen Patti Chowk, and Civic Center Choupati.
Read MoreRead Less
5.
Is Jabalpur covered by metro/bus network? What is the best way to travel across the city?
There is no metro network in Jabalpur and there is no local bus service either. The travellers can opt for intercity buses that go through the city. The best way to get around the city is auto-rickshaws and taxis. You can also hire cabs to move from one place to another.
Read MoreRead Less
6.
What is the nightlife in Jabalpur like?
Vini’s Bar is a great place to chill with friends. They have the best drinks and the best food, especially their pan-fried noodles and chicken tandoor is to die for. Hotel Avtar Bar and Restaurant is a luxurious bar and its décor is quite chic. Tiger Hunt is the place to go if you want to dance the night away with your buddies. Their signature drinks are Chardonnay, Cosmopolitan, and Mojito. 10 Downing Street is known for its funky ambience and overall contemporary setup. They have great music, which makes it the perfect place for a first date. At Madhuban Bar, you can just relax and get the choicest options for rum, vodka, beer, and whiskey. Yogi Bar has more of a casual vibe to it, making it great for a Saturday night plan.
Read MoreRead Less
7.
What are the best places to shop in Jabalpur?
Jabalpur is known for its exquisite variety of fabrics and artefacts. Shopping in the local markets is going to be a memorable experience. You should buy sarees from Chandari sarees and Maheshwari sarees. You can get souvenirs from Mrignayani, which is a Government Emporia. You can also check out all the other bazaars in the market area for some authentic things to carry back home. Make sure you have brushed up on your bargaining skills!
Read MoreRead Less
8.
What are the adventure things to do in Jabalpur?
Adventure junkies will have a time of their life in Jabalpur, thanks to the variety of things you can do here. Start with a boat ride at Dhuandhar falls. Next, take a boat ride and a cable car ride at Bhedaghat. You can enjoy the scenic beauty and waterfalls while doing so. Jungle Safari at Kanha National Park will help you capture the vegetation and the rich wildlife. Next, you can enjoy paddle boating, bird watching, and speed boating at Bargi Dam. Lastly, you can have a time of your life at the rides offered by Sea World Water Park.
Read MoreRead Less
9.
Can you please mention some private hotels in jabalpur where I can find good banquet halls ?
We do have some OYO associated hotels, which have a banquet hall. You can find them out by visiting the link below. Check out for the availability and book an accomodation as per your desire . https://www.oyorooms.com/hotels-in-jabalpur/with-banquet-hall/
Read MoreRead Less
10.
Suggest some hotels with a good bar in jabalpur?
There are many OYO associated hotels, where you can find a good bar. To view them, please link on the link below. Check out for the availability and book an accomodation as per your desire . https://www.oyorooms.com/hotels-in-jabalpur/with-bar/
Read MoreRead Less
Download OYO app for exciting offers.
Download on theApp StoreGet it onGoogle Play
About UsTeams / CareersBlogsSupportOfficial OYO BlogInvestor RelationsOYO CircleOYO Frames
Terms and conditionsGuest PoliciesPrivacy PolicyTrust And SafetyCyber SecurityCyber Security AwarenessResponsible Disclosure
Feeling lucky? Try out a random OYO. Find OYO
Have Queries ? Call for any assistance on 0124-6201600
OYO Townhouse
Your Friendly Neighbourhood Hotel
OYO HOME
Unlocking Homes
HOTELS BY CITY
Hotels near meHotels in GoaHotels in PuriHotels in MahabaleshwarHotels in OotyHotels in JaipurHotels in ShimlaHotels in ManaliHotels in UdaipurHotels in MussoorieHotels in PondicherryHotels in DelhiHotels in MumbaiHotels in NainitalHotels in LonavalaHotels in MunnarHotels in BangaloreHotels in MysoreHotels in DarjeelingHotels in Mount AbuHotels in KodaikanalHotels in HyderabadHotels in PuneHotels in ChandigarhHotels in ShirdiHotels in AgraHotels in GangtokHotels in CoorgHotels in ChennaiHotels in TirupatiHotels in DalhousieTravel GuideAll Cities HotelsCoupons
MOST POPULAR HOTELS
Hotels in HaridwarHotels in KolkataHotels in AhmedabadHotels in ShillongHotels in RishikeshHotels in VaranasiHotels in AlibaugHotels in MandarmaniHotels in SaputaraHotels in DamanHotels in OotyHotels in YercaudHotels in AmritsarHotels in MaduraiHotels in CoimbatoreHotels in KasauliHotels in DehradunHotels in DharamshalaHotels in GuwahatiHotels in LucknowHotels in McleodganjHotels in KatraHotels in Port BlairHotels in IndoreHotels in JaisalmerHotels in JodhpurHotels in PachmarhiHotels in VijayawadaHotels in TrivandrumHotels in Vizag
2013-2022 © Oravel Stays Limited