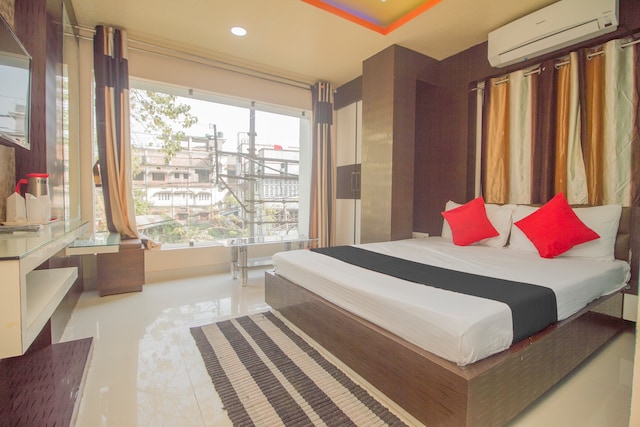 Kameswari Road, Cooch Behar· 1.5 km
Hurry, Only 1 room left!
3.3 (144 Ratings)·Fair
Free Wifi
Geyser
AC
+ 8 more
WIZARD MEMBER
₹762₹217865% off
per room per night
Log in to unlock exclusive deals
Enjoy up to 15% extra discount on your bookings
Login
Get access to exclusive deals
Only the best deals reach your inbox
Your email
1

Are you packing your bags for a weekend trip? How about visiting a town with a royal touch in North Bengal? Well, we are talking about Cooch Behar. Koch Bihar, better known as Cooch Behar, is a city in the state of West Bengal. The only well-planned city of North Bengal, situated at the Eastern foothills of the Himalayas, Cooch Behar is abundant with the remains of the royal heritage.
Situated 180 km away from Bagdogra, 200 km away from Darjeeling, and 172 km away from Siliguri, Cooch Behar is easily accessible via roadways, railways, and airways. Cooch Behar has an airport of its own and people keen on traveling by road can opt for state bus services or private bus services that ply from all the major cities. Cooch Behar enjoys a moderate climate characterized by heavy rainfall during the monsoon days which makes it an ideal time for people keen on enjoying rains. Tourists also visit Cooch Behar during the winter months as that is when the weather is pleasant.
The Royal Palace of Cooch Behar or the Cooch Behar Rajbari tops the list when talking about the most popular tourist attractions. The main palace, as well as the adjoining regal architecture, bear endless remains of the royal period. With shrines of Bhawani Maa, Madan Mohan, Tara Ma. and Kali Ma, the Madan Mohan Temple is another site that deserves a special mention. This temple was built by Maharaja Nripendra Narayan between 1885 to 1887. Other places worth visiting in Cooch Behar are Baneshwar Shiva Temple, Siddheswari Kali Bari, SagarDighi, Siddhanath Siva Temple, and Gosanimari Rajpat.
One of the biggest festivals of Cooch Behar is Rash Yatra, and the Rash Mela held during the time of Rash Purnima. People keen on exploring Cooch Behar up and close can plan their trip around these festivals to get the local essence of food, culture, and traditions. Like entire Bengal, fish delicacies and fresh deserts are a must-try during your visit to Cooch Behar. Some of the restaurants you can visit are Sadhna Hotel, Nitai Sarkar Restaurant, and Ripples among others.

OYO Hotels cater to comfort and convenience with free Wi-Fi, AC and non-AC rooms, running cold and hot water, 24-hour room service, complimentary breakfast, and in-house restaurants. One of the first key concerns while traveling to an offbeat location is the availability of safe and comfortable accommodation. OYO hotels in Cooch Behar are in close proximity to the city bus stand and popular tourist destinations. Both local and tourist markets are easily accessible as well.
To make the booking and check-in experience hassle-free, you can filter the OYO properties that allow couples and guests with a local identification card. For exclusive extra discounts, you can also filter OYO Wizard Member Hotels. Don't forget to download the OYO mobile app to get app-exclusive discounts and deals.
Read MoreRead Less