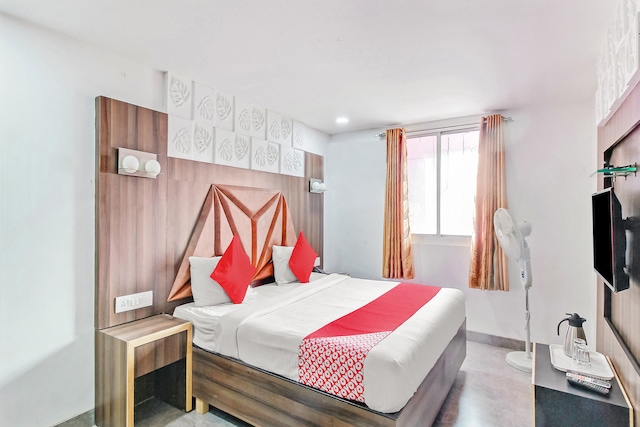 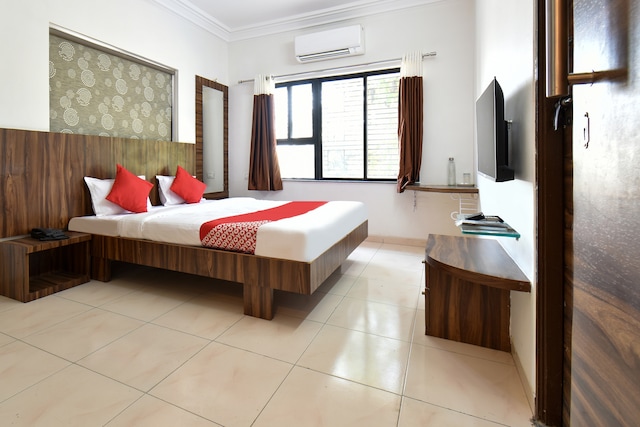 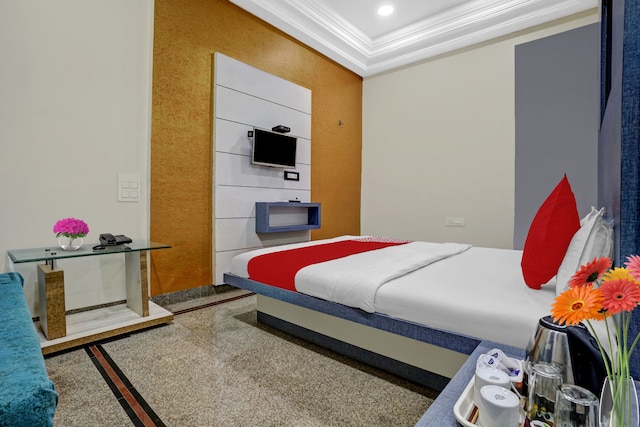 Aurangabad, Aurangabad· 9.6 km
3.5 (27 Ratings)·Good
Board Games
Free Wifi
Daily Housekeeping
+ 7 more
₹1294₹336161% off
per room per night
Log in to unlock exclusive deals
Enjoy up to 15% extra discount on your bookings
Login

Near Tapadia Square, Nirala Bazar, Aurangabad· 2.1 km
14 people booked this hotel today
3.9 (555 Ratings)·Good
Hair Dryer
Parking Facility
Power backup
+ 9 more
Sold Out
1
Aurangabad is named after the famous Mughal ruler Aurangzeb. It is among the most progressive cities in India, with expansion plans on a high in the past decade. The city maintained a low profile during the tumultuous medieval India period. It came into the spotlight when Aurangzeb made the city his capital from 1653-1707. With the emperor’s death, the city declined rapidly. However, the brief period of glory witnessed the construction of some significant monuments, including the Bibi-ka-Maqbara (a Taj Mahal replica).

The weather is fairly tolerable and perfect for excursions and sightseeing. One can also plan a trip Aurangabad during the monsoon - from August to October. The winter season (from November to February) is the best time to visit Aurangabad as the weather is perfect.


Places to Visit in Aurangabad

The Ajanta caves are older than Ellora. The 30-odd Ajanta caves are embedded in a steep, crescent-shaped hillside of a forested ravine of the Sahayadri hills. There are a lot of amazing places to visit in Aurangabad. The 30 Buddhist caves are dotted with sculptures and paintings that depict Buddha's life as well as his life during previous births. Five of the 30 caves are places of worship (Chaityas) while the rest are monasteries (viharas). If the thought of traveling during summer, the city is best visited during February.
The monuments have helped attract local and global tourists over the years. Apart from the other historic relics, which include a few Buddhist caves, these Mughal relics make the city a prime options for a weekend getaway from Mumbai. However, the real reason one should traipse here is that the town serves as the base for exploring world heritage sites like Ellora and Ajanta. It is pertinent to note that silk fabrics helped the city generate good revenue. In fact, the town is still known globally for its hand-woven Paithani and Himroo saris.

A number of budget hotels and restaurants are clumped together to the south of the town near Station Rd East and Station Rd West. Northeast of the bus stand is the bustling old town, with its Muslim quarter and narrow streets. There are a number of historical places of significance in the city. However, a tour of the Ajanta and Ellora caves stand out as the highlight of any trip to Aurangabad. The Ajanta caves were discovered by British officers in 1819. These caves found mention in Chinese pilgrim Hiuen Tsang’s writings during his India visit from A.D 629 and 645.
For those looking to spend a few days in Aurangabad, accommodation will not be an issue. There are quite a few branded and affordable OYO premium and budget hotels in and around tourist hotspots like Ajanta Caves, Ellora Caves and Devgiri Fort. One can also find rooms near the bus stand and train station. One can also find OYO hotels near Prozone Mall and Cidco.

Aurangabad is a famous city of India in the state of Maharashtra. This is a place liked by tourists from all over because of its historical importance. The name Aurangabad has been derived from the name of a Moghul emperor Aurangzeb. It is a prosperous city now witnessing growth in its economy mainly from the tourism industry. During the medieval period, this city witnessed turmoil and tumult which it overcame later. Aurangzeb made the city capital of his empire. Aurangabad houses bibi ka maqbara, a replica of the Taj mahal. There are hotels in Aurangabad for guests and tourist.

Winter is the best season to visit Aurangabad. There are famous Ajanta Caves in Aurangabad. There you can find remnants of Buddhist culture in the form of Buddhist caves and monasteries. These caves display some paintings and sculptures of Buddha and his time. These places along with Ajanta caves have helped the inflow of tourists all round year. Apart from relics from the Buddhist period, there are relics from the Mughal period as well. Aurangabad serves as a getaway for people from Mumbai who like to spend their weekends and holidays here. Ajanta and Ellora have been declared world heritage sites. This place is also known for silk fabric and sarees.

Accommodation in Aurangabad is no problem at all. There are quite a few good hotels and OYO rooms here. You may sensibly select hotels and rooms by OYO because they are comfortable, secure, well-maintained and above all quite economical. These are for various classes of guests. Upper crust will prefer a different hotel from the ones in the middle class. After all, said and done, staying in OYO hotels is an experience in itself.


OYO rooms and hotels with comfort and amenities in Aurangabad

All OYO hotels and rooms are quite good and affordable here. There are hotels in Aurangabad that offer certain things free of charge. Parking is provided by hotels without any charge. Breakfast also is free. The rooms of the hotel are clean, maintained and very spacious. There are TV and AC in rooms and there is a washroom too that is attached. Inside a washroom, there is a geyser. A bathtub is also fitted in the washroom. There are CCTV and elevators. You will find the upper conference room here. You can use a conference room for meetings and other events. WiFi is provided without any charge. There is a swimming pool outside. Hotels accept cards for payment. For dining, there is an in-house restaurant. There is a bar also.

Aurangabad, nicknamed as the “City of Gates”, located on a hilly upland terrain in the Deccan Traps, is the sixth most popular city of Maharashtra, India. The city is well-known for cotton textile, artistic silk fabrics and popular educational institutions. The name comes after the famous Mughal ruler Aurangzeb and is one of the popular tourist hubs. The special attractions are Ajanta Caves, Chaitya Griha, Aurangabad Caves, Ellora Caves, 30 Buddhist caves, Grishneshwar Temple, Kachner Jain Temple, Jama Mosque, Himayat Bagh Daulatabad Fort, 52 gates, Bibi Ka Maqbara, Tomb of Aurangzeb, Panchakki water mill, Salim Ali Lake and Bird Sanctuary, Siddarth Garden and Zoo. The weather of this city is tolerable and fair enough for excursions and the best time for travelling is November to February or August to October.

To spend a few days in this city, accommodation is no more an issue. OYO provides rooms according to the budget and is located all over the city. With OYO coupons one can avail amazing deals. OYO rooms come under some categories depending on the customer’s budget. These rooms lay down certain basic services to the customer as per the deals, for example card Payment, Parking Facility, Free Wi-Fi, Attached Bathroom, Daily Housekeeping, First-Aid, TV, AC as per choice, Fan, CCTV Cameras, Door Bell, Power backup, Fire Extinguisher, Wheelchair accessibility, Complimentary Breakfast, 24/7 Check-In, Security, Reception. OYO room size varies between Classic, Deluxe, and Suite and welcomes family, couples, international guests, business travellers and locals. For check-in ID proofs are required, PAN cards are not accepted and Pay at Hotel facility is provided. For Wizard Member OYOs, 5% off is given on member hotels.


Spot On Hotels in Aurangabad

Showing 1 - 9 of 9
1.
What are some of the best accommodation options in Aurangabad?
OYO Rooms has various accommodations options throughout the city. You can find a good place to stay based on what you plan to do in the city and also your budget

Best Accommodations
Read MoreRead Less
2.
Which are the best places to visit in Aurangabad?
Situated in the heart of the state of Maharastra, it draws an enormous amount of tourists from all over the world due to the rich diversity of experiences the city offers. Some of the must-visit places are Aurangabad Caves, Daulatabad Fort, Bibi-Ka-Maqbara, Ajanta Caves, The Ellora Caves & many more.
Read MoreRead Less
3.
Which is the nearest airport to Aurangabad city ?
Aurangabad Airport is a public domestic airport of the city located 5.5 km from the city center and 11 km from Aurangabad railway station.
Read MoreRead Less
4.
How do I apply discount coupons while booking rooms in maharashtra?
There is a 25% discount on every hotel at OYO. This is a pre-applied discount so no need to apply any discount. You can book the best hotels in maharashtra by visiting this link: https://www.oyorooms.com/state/hotels-in-maharashtra/
Read MoreRead Less
5.
Can I get the list of hotels in Aurangabad maharashtra with tariffs ?
With the help of OYO, you can swiftly find and book hotels in almost every part of the country. Just visit this link and you will get the complete list of hotels in Aurangabad with their tariffs -https://www.oyorooms.com/hotels-in-aurangabad/
Read MoreRead Less
6.
Do hotels in MGM Aurangabad provide free breakfast ?
OYO hotels proffer a meal plan where the guests get a complimentary breakfast included in the room tariff. Guests can opt for more meals of the day by contacting the OYO captains for the availability of meals. Find the best breakfast in town at - https://www.oyorooms.com/hotels-near-mgm-aurangabad/with-complimentary-breakfast/
Read MoreRead Less
7.
hotels in Aurangabad station
It takes around 2 hours to cover the distance of 98 kms from Aurangabad to Ajanta Caves. They are open all throughout the year from 9 AM to 5:30 PM.
Read MoreRead Less
8.
How to book 4 star hotels in Aurangabad maharashtra ?
To stay in full luxury and availing yourself with a comfortable accommodation option you can filter out your preferences by going onto the option of 'Luxury OYO's' under the head of 'Collections' and get onto the page with the list of hotels of this category.
Read MoreRead Less
9.
How to book good hotels in Aurangabad railway station ?
For booking fine hotels near the railway station, you just need to select ' Railway Station' under the 'Popular Localities' filter. Look for the hotel with your preferred amenities and book your pick.
Read MoreRead Less
Download OYO app for exciting offers.
Download on theApp StoreGet it onGoogle Play
About UsTeams / CareersBlogsSupportOfficial OYO BlogInvestor RelationsOYO CircleOYO Frames
Terms and conditionsGuest PoliciesPrivacy PolicyTrust And SafetyResponsible Disclosure
Feeling lucky? Try out a random OYO. Find OYO
Have Queries ? Call for any assistance on 0124-6201600
OYO Townhouse
Your Friendly Neighbourhood Hotel
OYO SilverKey
Executive Stays
OYO HOME
Unlocking Homes
HOTELS BY CITY
Hotels near meHotels in GoaHotels in PuriHotels in MahabaleshwarHotels in OotyHotels in JaipurHotels in ShimlaHotels in ManaliHotels in UdaipurHotels in MussoorieHotels in PondicherryHotels in DelhiHotels in MumbaiHotels in NainitalHotels in LonavalaHotels in MunnarHotels in BangaloreHotels in MysoreHotels in DarjeelingHotels in Mount AbuHotels in KodaikanalHotels in HyderabadHotels in PuneHotels in ChandigarhHotels in ShirdiHotels in AgraHotels in GangtokHotels in CoorgHotels in ChennaiHotels in TirupatiHotels in DalhousieTravel GuideAll Cities HotelsCoupons
MOST POPULAR HOTELS
Hotels in HaridwarHotels in KolkataHotels in AhmedabadHotels in ShillongHotels in RishikeshHotels in VaranasiHotels in AlibaugHotels in MandarmaniHotels in SaputaraHotels in DamanHotels in OotyHotels in YercaudHotels in AmritsarHotels in MaduraiHotels in CoimbatoreHotels in KasauliHotels in DehradunHotels in DharamshalaHotels in GuwahatiHotels in LucknowHotels in McleodganjHotels in KatraHotels in Port BlairHotels in IndoreHotels in JaisalmerHotels in JodhpurHotels in PachmarhiHotels in VijayawadaHotels in TrivandrumHotels in Vizag
2013-2022 © Oravel Stays Limited