23 UNESCO World Heritage Sites In India That You Must Visit

India has been famous for its richness in culture and architecture for centuries. The country has been shaped by its long history, unique geography, and diverse demography so much so that many of its key attractions have made it to the list of UNESCO World Heritage Sites in India. Here are some heritage sites in the states of India that you must visit at least once in your lifetime.

Assam symbolizes every natural beauty there is- from breathtaking scenery to floral and wildlife abundance. The state happily boasts of two UNESCO Heritage Sites:

a. Manas Wildlife Sanctuary: The Manas Wildlife Sanctuary lies in the foothills of Himalayas. The sanctuary is the habitat of several rare and endangered species of plants and animals. It is famous for Royal Bengal tigers and is a key Project Tiger reserve. It is recognized not only for its rich biodiversity but also for its scenery and natural landscape. b. Kaziranga: This major bio-diversity hotspot has the distinction of being home to the largest population of the great Indian one-horned rhinoceros. The park is also home to large populations of elephants, wild water buffalo and the swamp deer.

Like a great naturalist once said, ‘Kaziranga excites the senses, arrests the soul. It beckons a visit’.

The Capital of India, Delhi is a symbol of the country’s rich past and blooming present. A few heritage sites in Delhi are: 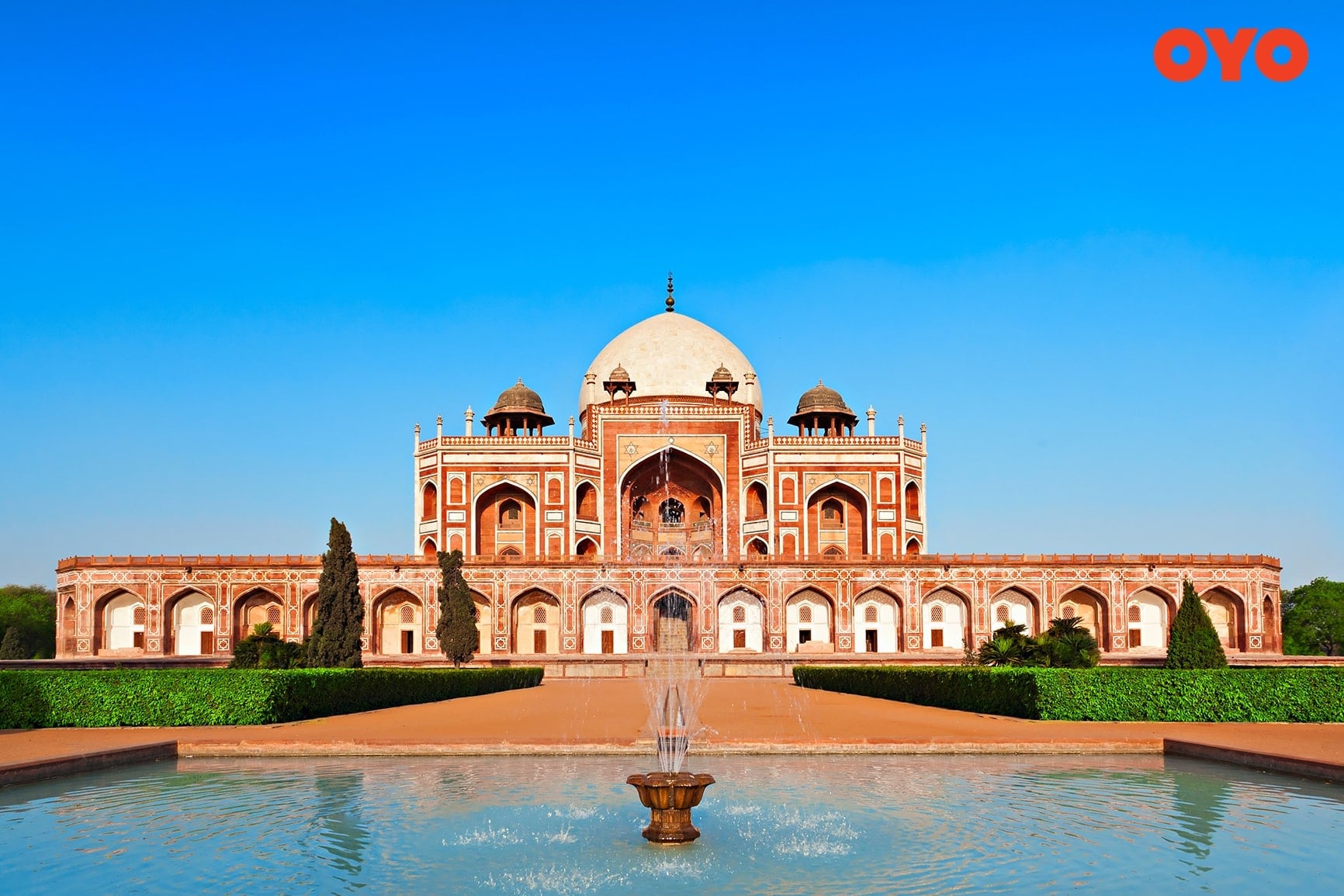 a. Humayun’s Tomb: This World Heritage Site in India was built by Begum Bega, the first wife of Humayun in 1565-1572. It is the only monument to have undergone major restoration work and is complete. It is a complex consisting of several smaller monuments, including the tombs of Isa Khan Niyazi, an Afghan noble in Sher Shah Suri’s court of the Suri dynasty. b. Qutub Minar: Qutub Minar was built in 1193 by the first Muslim ruler of Delhi, Qutub-ud-din Aibak of the Mamluk Dynasty, after defeat of Delhi’s last Hindu Kingdom. The Qutub Minar is one of the several other buildings located within the Qutub complex, and it occupies the centre stage mainly due to its height. It is a famous tourist destination in Delhi.

c. Red Fort: Situated in the center of the historic city of New Delhi, the Red Fort was built by Shah Jahan when he shifted his capital from Agra to Delhi. With its iconic red-sandstone walls inlaid with precious stones and intricate floral motifs, Red Fort is a major landmark and tourist attraction in New Delhi.

Churches and Convents of Goa Churches and Convents of Goa, famously called the “Rome of the Orient,” were built by the Portuguese colonial rulers between 16th and 18th centuries. These monuments are mainly in the former capital of Velha Goa. The most important of these monuments is the Basilica of Bom Jesus, the tomb containing the relics of St. Francis Xavier.

The monuments were the pioneers in establishing the Manueline, Mannerist and Baroque art forms in the Asian region. They are built in laterites and walls plastered with limestone mortar mixed with broken shells. Thus, the monuments need constant maintenance to prevent climatic deterioration.

The majestic cave temples and the famous national parks make Karnataka a must-visit state. The state boasts of some unique landmarks that have been recognized by UNESCO as heritage sites. a. Group of Monuments at Hampi: The extravagant Hampi town, on the banks of the river Tungabhadra in Karnataka is dotted by a number of landmarks and monuments that are recognized for their brilliant architecture. The Vitthala temple is an excellent example of Vijayanagara style. The Krishna temple, Pattabhirama temple, Hazara Ramachandra and Chandrashekhara temple as also the Jain temples, are other examples.

b. Group of Monuments at Pattadakal: Pattadakal is an important tourist site in Karnataka.  The significant monuments are- Virupaksha Temple, Sangameshwara Temple, Chandrashekhara Temple, MallikarjuTemple, Kashivishwanaath Temple, Galganath Temple, Jain Temple and many more. The friezes in the temples show Vedic concepts, communicate stories from the Ramayana, the Mahabharata, the Bhagavata Purana, and other Hindu texts such as the Panchatantra Located in Panchmahal district of Gujarat, Champaner-Pavagadh Archaeological Park is a noted attraction frequented by locals and tourists alike. A concentration of largely unexcavated archaeological, historic and cultural heritage properties are cradled in a stunning landscape of the town.The rustic environment around the  park is also worth exploring.

The city of dreams, Mumbai provides you a lot of amazing experiences that you can’t afford to miss. Here are a few heritage sites that reside in Mumbai: a. Elephanta Caves: Located off the coast of Mumbai are a chain of sculpted caves on Elephanta Island. These are a number archaeological remains which offer us a glimpse into the rich cultural past of Indian civilization. The caves are known for their rock-cut sculptures and carvings depicting Shiva as the Creator and the Destroyer of the Universe. The caves are carved in solid basalt rock earning them a status of an important heritage site.

b. Ajanta Caves: They comes under UNESCO World Heritage as a cultural heritage site, are Buddhist caves. The caves depict richly decorated paintings, frescoes, which are reminiscent of the Sigiriya paintings and sculptures in Sri Lanka. Konark Temple is a 13th-century ancient monument at Konark. Built in the form of the chariot of Surya, the temple depicts the grace, the joy and the rhythm of life in all its wondrous variety.

A major part of the structure at present is in ruins.  The shape of the temple is of a massive chariot with sumptuously engraved stone wheels, pillars and walls.

Highly enriched with rich culture and tradition, the city of Rajasthan has a lot to offer you. a. Keoladeo National Park:  This Park in Bharatpur is located within the Indus-Ganges Monsoon Forest Bio geographical Province. Extending over an area of 2,783 hectares, it was declared a National Park in 1982 and was inscribed in the UNESCO World Heritage List in 1985 as a natural property. Formerly a duck-hunting reserve of the Maharajas, the park is home to rare and exotic bird species like the Siberian crane. The Keoladeo National Park is  of grave importance for migratory waterfowl. b. Jantar Mantar: Featuring a rich collection of the works of Maharaja Jai Singh II, including his ancient architectural and astronomical instruments,  the Jantar Mantar is a popular tourist spot. On either side of the complex’s triangular gnomon is a quadrant of a circle, parallel to the plane of the equator making it truly a unique site worthy of the honor.

The land of glorious sculptures and magnificent paintings, Tamil Nadu is just the place you’ll love to explore.

a. The Great Chola Temples: The finest works of the Chola Empire, the great Chola Temples are known for their unique architecture. The Airavatesvara temple complex, built by Rajaraja II features a heavy Dravidian and Tamil influence in its architecture. Other notable temples like the Brihadeeswarar Temple reflect the artistic skills of the Cholas. Embedded in the heart of India, Uttar Pradesh a land of varied cultures and religions provides you with a plethora of finest places to visit. a. Taj Mahal: A stunning tomb of white marble, this symbol of love was built by  Shah Jahan in memory of his favorite wife. The Taj Mahal is the jewel of Muslim art in India and one of the universally appreciated treasure of the world’s heritage. c. The Agra Fort: Yet another Heritage Site that Uttar Pradesh houses is the Agra Fort. Situated near the gardens of Taj Mahal, the Fort is an important 16th-century Mughal monument with a historical significance. Popularly known as the home of Bengal Tigers, Sundarbans National Park is home to rare and endangered flora and fauna. The area has a silent charm that amazes one with its simplicity and rich natural surroundings. It has righfully been counted as one of the natural wonders of the world. Mahabodhi Temple Complex at Bodh Gaya is a unique landmark of cultural and archaeological importance. The main temple, built in Indian architectural style between 5th and 6th centuries is the oldest temple in India. The complex is one of the prime monuments built during the “Golden Age” of Indian culture credited to the Gupta period.

From lush green jungles to the peaceful places of worship all the places in Madhya Pradesh offer you the best of your experiences. b. Rock Shelters of Bhimbetka: Declared as UNESCO Heritage Site, the Rock Shelters of Bhimbetka are where the earliest traces of human life on the Indian subcontinent was discovered. They are located on the foothills of the Vindhaya Range and indicate the beginning of the South Asian Stone Age. The rock shelters have a group of 5 rocks which are renowned for the Mesolithic era carvings and paintings. 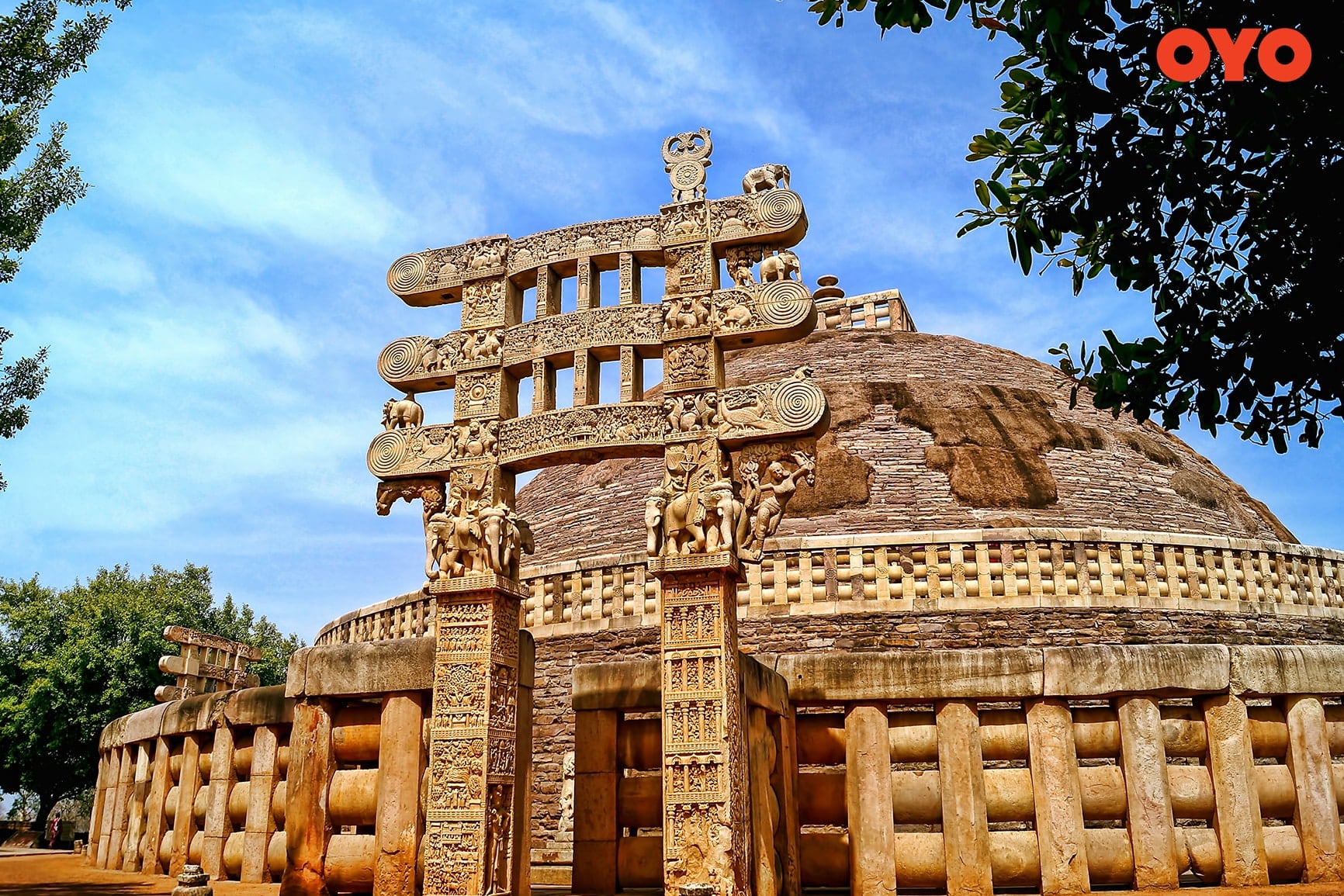 c. Buddhist Monuments at Sanchi: Situated 45 kilometers from Bhopal, these are a group of Buddhist monuments dated between 200 BC and 100 BC. The sanctuary has an abundance of monolithic pillars, palaces, temples and monasteries in different status of preservation. Explore the rich history of Buddhism and its birth in India.

So, are you ready to explore the natural and cultural heritage, already? Let us know in the comments below.