6 Most Admired & Famous Palaces In India

The vast expanse of India is home to many opulent princely estates of ancient India. Featuring brilliant architecture and design, these monuments are a major tourist attraction. Here are some of these famous palaces in India that you should explore on your next getaway. Modelled on the banks of the picturesque Lake Pichola, the City Palace is a 400 year old Palace, built by the Mewars in Udaipur. Perched atop a hill, the Palace is considered as one of the largest of its kind.

Maharana Uday Singh and his successors established this architectural marvel for the royal family of Mewar in the year 1559. Made entirely of granite and marble, the palace has intricately carved walls embellished with murals and dainty mirror work. The foyers have been described as Pols namely the Bara Pol and the Tripolia Pol.

Walk through Amar Vilas that leads to the entrance of Badi Mahal also known as the Garden Palace in the complex.

To get a peek into the country’s ancient heritage and mythology, stop by at Bhim Vilas.

This spellbinding framework constructed by Maharaja Sawai Pratap Singh in 1799, is one of the major tourist attractions of Jaipur. Located in the heart of the city, the Hawa Mahal is a five storey pink honeycomb structure which lends the palace its uniqueness.

The royal remnants are very much a part  of Hawa Mahal. The 953 ‘Jharokhas’ adorned with latticework were specially designed for the royal ladies to observe everyday life and festivals in the streets of Jaipur. The palace is made with red sandstone consisting of need-based chambers with pillars, corridors, and some minuscule portholes. It reflects the blend of Hindu, Rajput and Islamic Mughal Architecture. A small museum inside the Mahal offers a glimpse of some ancient paintings, relics, and armor.

Set amidst the city of Jaipur, while visiting the Hawa Mahal you can also take some time out for a shopping spree at the ‘Lal Bazaar’ and buy some antique Jaipuri handicrafts and goods. 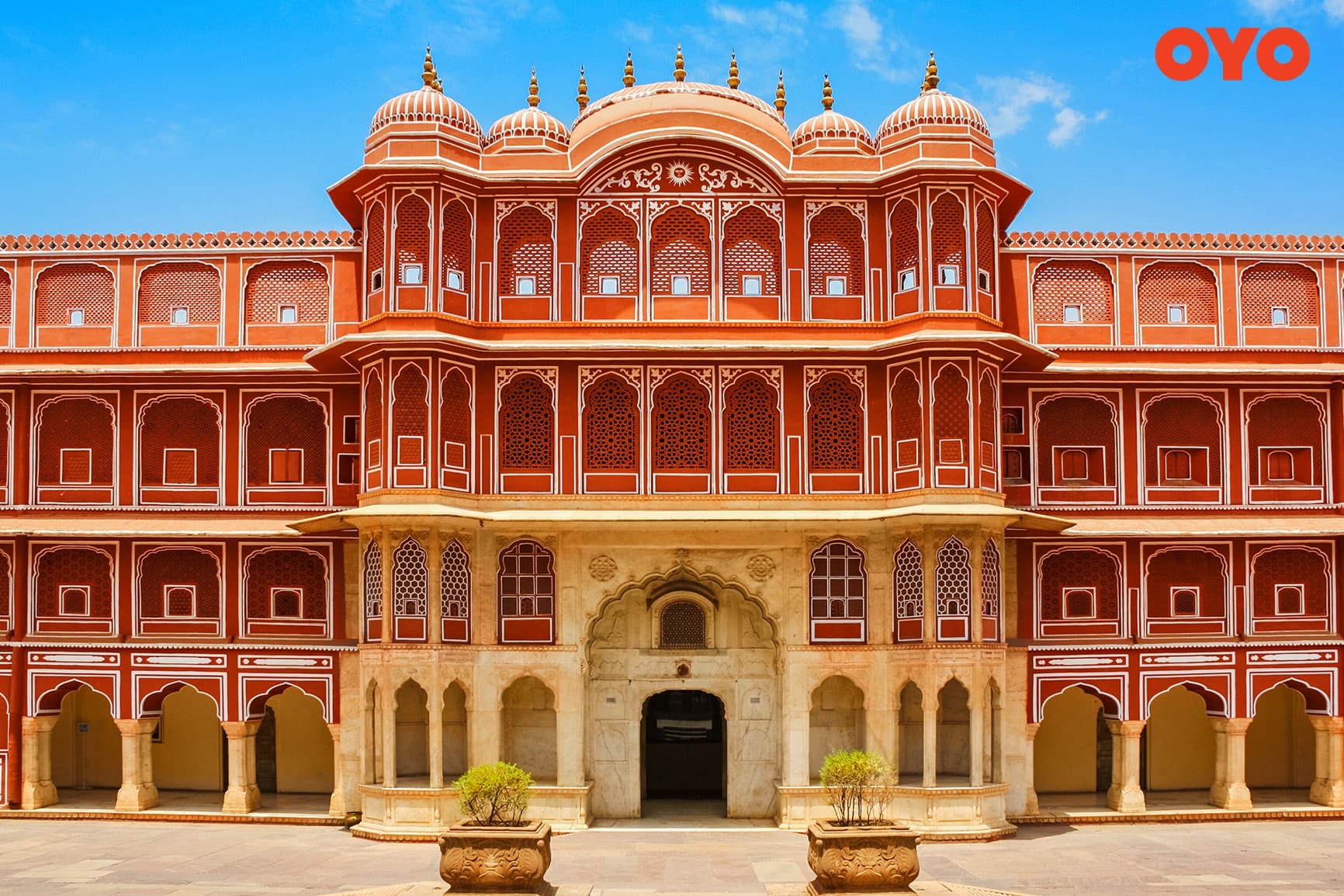 The palace structure has been designed and built using red and pink sandstone rendering a warm hue to its ambiance. The entry gates namely the Tripolia, Udai Pol and Virendra Pol are one of the most spectacular gems of the Palace. Made entirely of white marble, the Diwan-I- Aam in the palace complex is another key attraction of historical significance. The chamber has earned a spot in the Guinness World Records for holding the largest number of sterling vessels.

Explore the magnificence of Maharani Palace which has now been converted into a museum. The museum houses many royal weapons and artifacts. Take a stroll to the Mubarak Mahal, Chandra Mahal, and Pritam Niwas Chowk to get a deeper look into the history of the Palace. 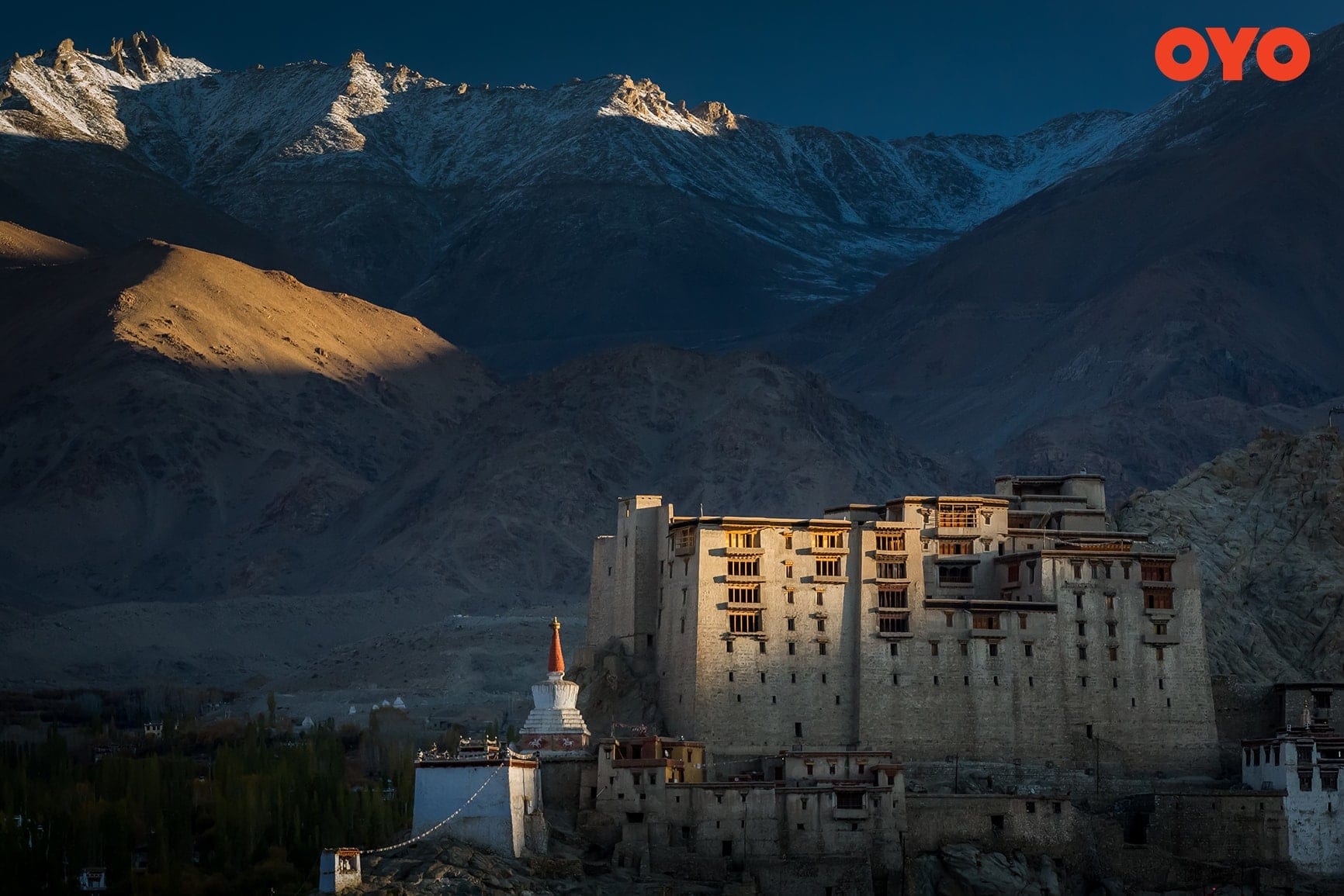 Sprawled over the mighty Namgyal hill, the Palace of Leh, also known as ‘Lhachen Palkhar’ was the former abode the King Snegge Namgyal. Built by Snegge Namgyal in 17th century, this nine storeyed royal palace stands tall against the backdrop of sky-scraping Zanskar range despite a Kashmiri invasion in the 19th century.  Over the years, large parts of the palace were destroyed but are now being re-built under the Archaeological Survey of India and the massive rooms and corridors have been transfigured into exhibition halls for visitors.

The palace design includes intricate wood carved figures at the foyer demonstrating the Medieval Tibetan Architectural style. A major part of the palace is made of stones, wood and mud; however, some of the murals are still manifested on the walls of the palace making it alluring to the visitors.

Explore the Leh Palace today to peek into the ancient and rich Tibetan culture. Preserved in the heart of Gwalior is the 19th century Jai Vilas Palace. This palace was built for the Maharaja of Gwalior, Jaiji Rao Scindia in the year 1874 who spent a hefty sum of INR 1 crore at the time.

Modeled after the Palace of Versailles in Gwalior, the palace’s blend of Tuscan, Italian-Doric and Corinthian architecture makes it a unique and popular tourist attraction in the city. The palace entrance called Durbar Hall is heavily ornamented with gold furnishings carpets and chandeliers.

The palace has 400 rooms, out of which 40 rooms have been altered into Jaiji Rao Scindia Museum while one part is still the domicile to the former royal Maratha Scindia Dynasty. Flanked by Chamundi Hills, the Mysore Palace, commonly called the Ambavilas palace once served as the official residence to the Wadiyar Dynasty of Mysore.

The palace architecture has been influenced by the Indo-Saracenic form i.e. .the fusion of Hindu, Rajput, Mughal and Gothic styles. Enveloped with lush green gardens, the main complex is a massive structure with 245 feet in length and 156 feet in width. The palace roofs are made of rosewood with intricate floral motifs made of ivory lending further charm to the palace’s beauty.

Take yourself to the City of Palaces and gaze at this historic Place of the South.

So don’t let anything hold you back from exploring the world with your eyes. Set out for an exciting solo adventure across these cities and make everlasting memories.