How did you spend your last holiday -lounging in the sun-kissed beaches or trekking across some picturesque hill stations?

How about giving your holiday a ‘wild’ spin this time!

With over 500 wildlife sanctuaries and 200 national parks in India, each housing the most exotic flora and fauna in its confines, India is every wildlife enthusiast’s dream.

Here are some of the most famous national parks and wildlife sanctuaries of India that will mesmerize you with their unique charm. Nestled in the Western Himalayas, the Great Himalayan National Park is a haven for eco-tourists and adventure seekers. Offering a sweeping view of the Himalayan peaks, the park is lined with thick foliage of rhododendron and oak while a rhythmic flow of streams echoes through the valley, making it an ideal nature retreat.

Listed as a UNESCO World Heritage Site, the park has a multitude of flora and fauna, both rare and elusive. Bird watchers can pick out their binoculars to catch a glimpse of over 200 species of bird-like pheasants, Kaleej and the Lammergeyer. Explore the forest periphery that houses animals like the elusive snow leopard, the Himalayan brown bear, blue sheep and red fox. Take a nature walk to discover rare medicinal herbs that grow abundantly in the valley.

Enjoy river-crossing and rappelling in the rivers of Kullu. Trekkers can scale the Lower Himalayan Ranges on their visit to GHNP to watch the splendid view of the pristine valley. Ensconced in the valleys of Ladakh, the Hemis National Park is one of Asia’s most well-known natural habitats of the Snow Leopard. The Park offers a unique landscape of mountains, vast flatlands, cold deserts and more to the nature lovers, while the Indus River playfully flows through the park feeding its diverse wildlife and avifauna.

The Park is mostly barren with a thin coverage of Himalayan subtropical pine forests and alpine shrubs and meadows. But you can discover species like Junipers, Poplar and Birch.

Enjoy a thrilling encounter with the ferocious Snow leopard and rejoice at the sight of Eurasian brown bear, Palla’s cat, Tibetan argali and Ladakh Urial, and much more. Catch sight of the exotic bird species like the Tickell’s Leaf Warbler, Rough-billed Cough Himalayan, Snow-cock and more.

A number of Tibetan gumphas and holy chortens lie in the park confines so you can explore the Tibetan culture and Buddhism deep in the nature’s hood. Explore the ancient heritage of Leh in the 11th century Hemis Monastery near the National Park. You can also make a short trek to Gotsang Stupa, Shampa Stupa and Shang Stupa. The Royal Bengal Tiger- this is probably the first thought that comes to mind when one mentions the Jim Corbett National Park. But there is so much more to it than just that.

Abundant in rich flora and fauna, this rustic ‘Paradise of Tigers’ rests against the contrasting backdrop of the scenic Nainital Hills. With diverse terrains in its confines, ranging from hills to marsh-depressions, grasslands to a gushing lake, the park houses a wide array of wildlife and floral species.

Enjoy a thrilling rendezvous with nature and wildlife on a Jeep Safari or hop onto the elephant back to blend with the natural habitat. You are sure to spot a lazy sloth hanging by a tree or the Bengal tiger roaring in the forested path among the other species. Otters and fish are usually spotted close to the lake in the park.

Visit the nearby Dhangarhi Museum, Corbett Waterfall and Garija Temple to make the most of your visit.

Formerly a hunting ground of the ‘maharajas’, exclusive to the royals, the Ranthambore National Park now welcomes everyone to enjoy its beauty and witness the exquisite flora and fauna housed within.

The Park, dotted by a thick cover of Dhok trees, is most famous for its diurnal tigers but there are many other wildlife species like Sloth bears, Sambar deer, Indian fox and the list goes on. Take a safari ride to watch the animals, relaxing in their natural habitat. Owing to its abundance of water bodies, it has an excellent population of birds both resident and migrant. Bird watchers should head to Malik Tao or Ranthambore Fort to catch sight of the beautiful bird species like Hornbill, Falcon, Dove and even Flamingo.

Safaris done and pictures clicked? Head to town and visit the landmarks of Ranthambore. Shop for authentic handicrafts or enjoy delectable cuisine at the famous eating joints. 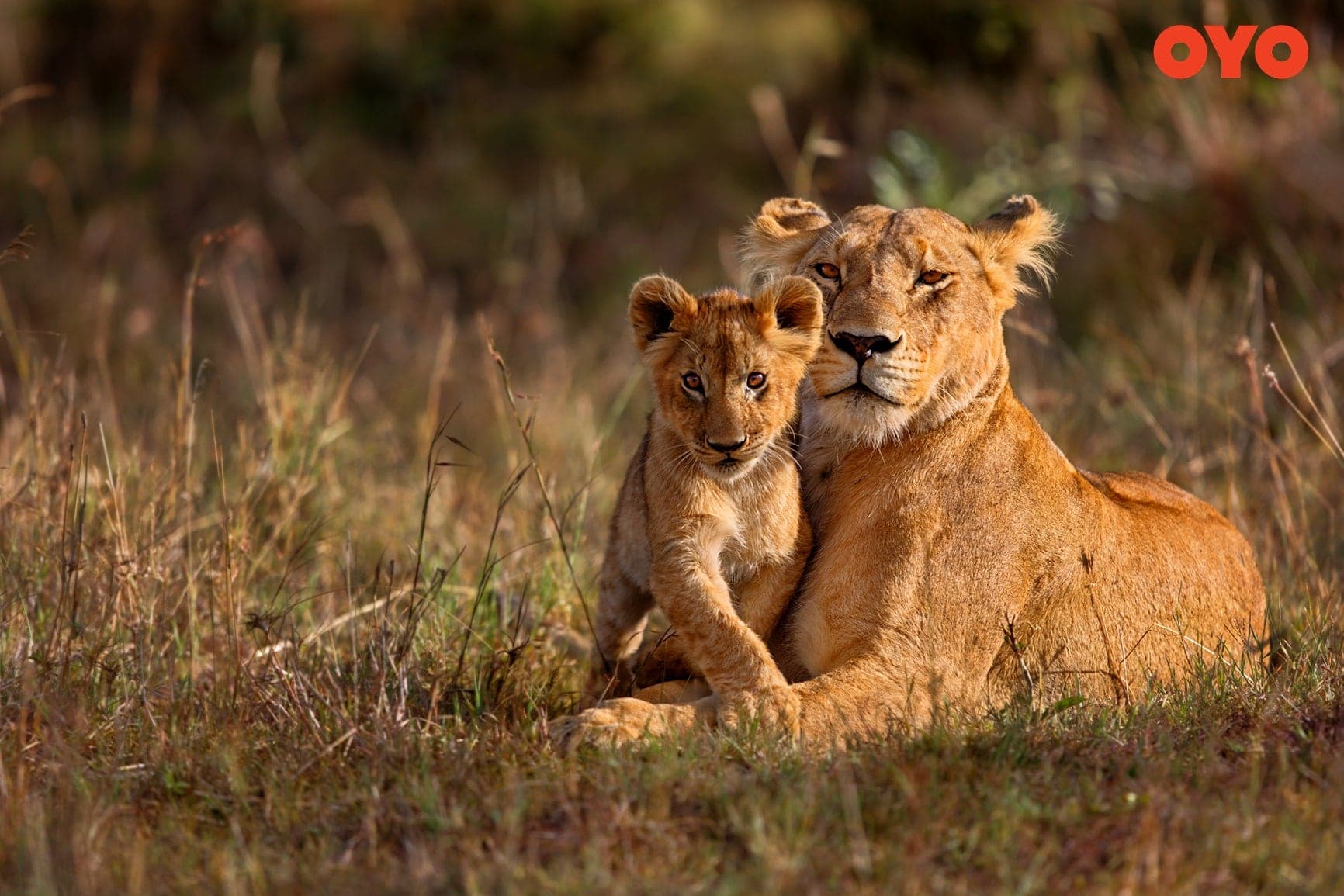 With pristine rivers, dense deciduous forests and enchanting valleys, the Gir National Park in Gujarat is a famous destination for wildlife enthusiasts and boasts of hosting the only Asiatic Lion population in the world. Fed by a perennial river and streams, the sanctuary has large water bodies like the Kamleshwar Dam that house a population of marsh crocodiles and many birds.

Your visit to this sanctuary is incomplete without spotting the mighty lions. Take a thrilling open jeep safari in the deep woods of Gir to explore the vastness of the park and watch the lions and cubs resting in their lush surroundings. Apart from the lions, the sanctuary also houses species such as Sambar, Chital and leopard among the other species of fauna.

After you have marveled at the sight of the wildlife in the park, head to the temple of Kankai Mata and take a dip in hot springs or visit the picturesque Flamingo Island. Bird lovers must pay a visit to the Nalsarovar Lake and Sanctuary that is home to many water-bird species. One of the most bio-diverse regions in the world, the Periyar National Park is an epitome of nature’s bounty and charm. Famous for its verdant trees and scenic view, the park shelters many threatened and endangered species, including the Royal Bengal tigers and Elephants among others.

Take a jeep safari to spot the elephants, gallivanting in large groups at the Park or watch the wild boars sleeping under the sun. You can give your sanctuary excursion a spin by taking a boat cruise at the lake to spot the reptiles and aqua-fauna. Take a nature walk across the park to rejoice at its enchanting floral beauty and abundance of teak, rosewood, sandalwood, and Indian Conifer. Many medicinal plants and tea and coffee plantations are also found here

Don’t miss the Periyar Lake, Kumily and Cardamom Hills on your visit. Sprawled over 430 square kms, with the Brahmaputra flows along its boundary, the Kaziranga National Park in Assam houses world’s two third one-horned rhinoceros population. Declared to be a UNESCO World Heritage Site, the park is a major bio-diversity hotspot.

Enjoy an early morning jeep safari to spot tigers, elephants and rhinoceros actively moving around the park. For an even thrilling experience, opt for the elephant safaris to watch the wildlife, unfiltered in their natural surroundings. You can hire a guide to gain a deeper knowledge of the park and the wildlife. You will come across many exotic migratory birds and water birds that keep the park alive and add further to its biodiversity. Not only Kaziranga National Park, their are various places to visit in Guwahati

So gather your binoculars, sunscreen and camera and head out to spend time in the lap of nature watching its finest creations and let its beauty win your heart.