8 Vibrant Temples in Vrindavan to Visit During Holi

8 Vibrant Temples in Vrindavan to Visit During Holi

Vrindavan – the birthplace of Lord Krishna and His hometown, is filled the Lord’s childhood memories, His love Radha, and more. Vrindavan is touted as one of the most significant religious destinations by Hindu pilgrims all over the country and across the globe. Ardent followers of Lord Krishna joyously make their way to Vrindavan during Holi to immerse themselves in the vibrant festivities.

It goes without saying that Holi is one of the major festivals in North India. Therefore, it is obvious for vast scores of Hindu pilgrims to make their way to Vrindavan and Mathura during March. If you are planning to come to Vrindavan in March, then do not forget to indulge in the Holi festivities. Book a hotel in Vrindavan in advance to avail the best hotel deals. Check out the hotels in Mathura and Vrindavan before planning your trip.

Also, there are numerous temples that you have to see whenever you get a chance to come to Vrindavan. Here are some of the most popular temples that travellers need to visit if and when they are coming to Vrindavan for the first time: 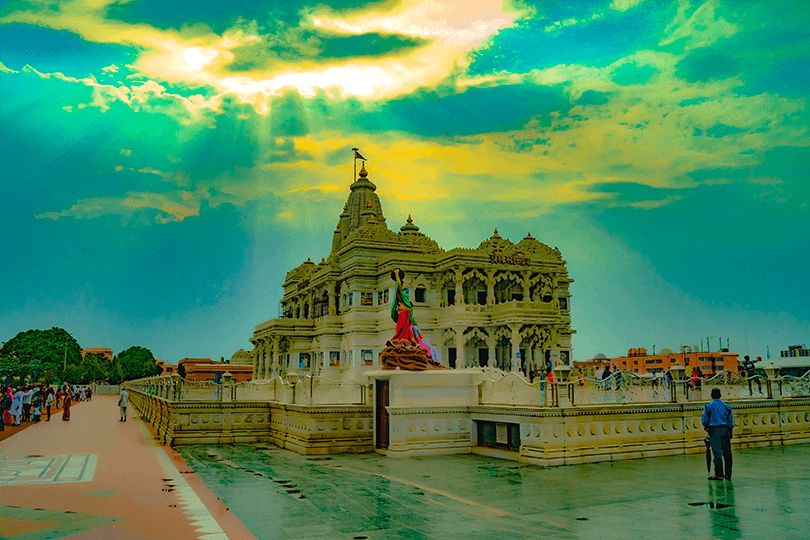 The Prem Mandir is considered the symbol of love in Vrindavan by many. The temple is located on the outskirts of Vrindavan and is spread across an area of over 50 acres. Dedicated to Lord Krishna and Sita Ram, this temple is a symbol of the Sanatan Dharma and the history associated with it. Book a hotel in Vrindavan near Prem Mandir to visit this holy structure located in Vrindavan. 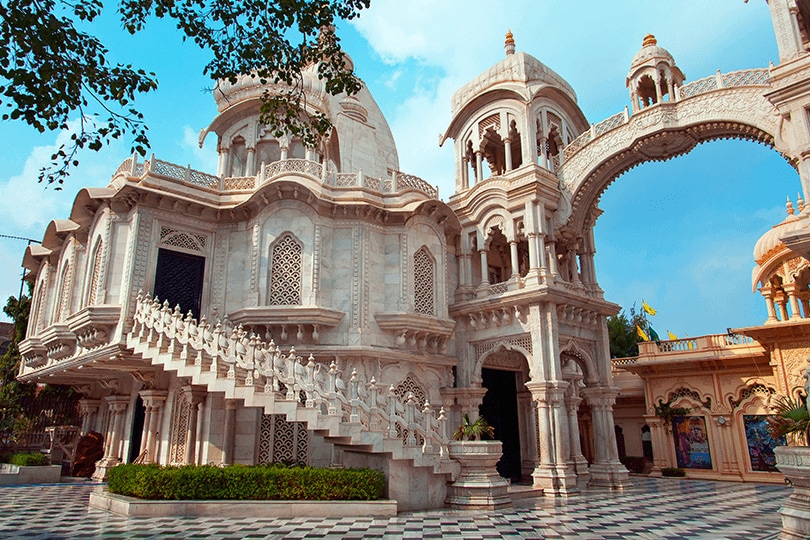 It is one of the most significant Hindu temples in North India and is revered by Hindu pilgrims from all over the country. The temple has been built by the International Society for Krishna Consciousness. The entire structure is made using white marble and there are peacock staircases on each side that adorn the place beautifully.

If you are planning to travel to Vrindavan during Holi, make sure ISKCON Temple secures a spot in your travel itinerary. Travel experts recommend you book a hotel in Vrindavan (near ISKCON Vrindavan to have a convenient visit to the temple.

Shri Pagal Baba Mandir lies on the Mathura-Vrindavan Marg and is one of the most significant temples in Uttar Pradesh.  The temple consists of eleven (11) storeys and has been constructed using white marble. There are mini-shrines on each of the floors that add multiple layers of beauty to this already stunning piece of marvel.

The temple can be visited easily if you are staying in Vrindavan or if you’re coming to Vrindavan from out of the town as many of the biggest Hindu temples would be found in Vrindavan. Travellers all around the country make it a point to visit Shri Pagal Baba Mandir during Holi to be a part of its larger-than-life and extremely flamboyant Holi celebrations.

Nidhivan Mandir is not just a significant Hindu temple but also a fascinating tourist spot for those who wish to lose themselves to the beauty and abundance of nature. The legends have it that Lord Krishna, along with Radha and the Gopis, performed Raas-Leela on the grounds of Nidhivan.

Therefore, nobody is allowed to visit the temple after the sun sets in. This temple should definitely be there on your travel list this Holi season as during Holi celebrations, Nidhivan is a spectacle. Since it gets really heavy on tourism during Holi, it is much recommended that you book a hotel in Vrindavan much ahead of the time and secure your spot.

Shri Banke Bihari Mandir is one of the most significant temples dedicated to Lord Krishna in Vrindavan. Here, Krishna is known as Banke Bihari (Supreme enjoyer). You will come across a black-coloured statue of Lord Krishna the moment you make your way into the temple. This temple is one of the seven (7) temples dedicated to the ‘Thakur of Vrindavan’. The entrance of this temple is covered in yellow. Look for hotels in Vrindavan near Banke Bihari Temple to avoid rush and congestion during the Holi festivities.

Do not forget to visit this temple if you plan to visit Vrindavan. The temple was built during the 1630s by the son of a Hindu ruler from Bikaner. However, it was damaged severely when Aurangzeb, the Mughal ruler, damaged it severely.

Reconstructed in 1819, the temple is dedicated to Radha and Krishna, much like most other temples in the region, but you would find statues and figurines of other deities as well. Book a hotel in Vrindavan to make your visit to this holy land memorable and exciting.

This temple presents a unique picture in many ways. First and foremost, it is not fully accessible to you in case you are a non-Hindu. Second, it is not dedicated to any Hindu god in particular as you’d find idols of Lord Vishnu, Lord Ram, and Sita.

Also, the temple presents a unique mixture of architecture from north and south. It is a 180 year-old temple that is visited by Hindu pilgrims every year. Book a hotel in Vrindavan during Holi and you will be able to join the celebration.

The Radharaman Temple is one of the most beautiful temples that you’d come across during your trip to Vrindavan. The temple is believed to have been built on the grounds wherein Lord Krishna revealed himself to the world in his Holy/divine form. The temple is one of the most significant structures that you’d come across in Vrindavan.

The place is also known as one of the places where Radha and Krishna meet. Visit this place during Holi and you will be able to join the celebration. There is a lot of pomp and show that the visitors get to see in March (during Holi). Make sure you book the best hotel in Vrindavan before your visit.

There’s so much to see and do in Vrindavan around Holi that you’ll never have a dull moment there. So, without further ado, book a holiday to Vrindavan and bask in the glory of this ancient land that has been enticing travellers from all parts of the world.