OYO Hotels Japan has taken a multitude of proactive measures to support its hotel partners and community at large, and counteract the impact of COVID-19, which is wreaking havoc on the hotel industry in Japan. The latest in this series of actions by OYO are financial packages designed to help hotel owners tide over diving revenues and vanishing working capital. The company is also focussing on moving to revenue sharing contracts with its owners.

The impact of the ongoing COVID-19 crisis is evident across the globe and nothing of this magnitude has been witnessed for over 100 years since the Spanish Flu epidemic of 1918. So far, ~2.6 million people have been affected in 212 countries with 177k+ deaths. Travel and hospitality are among the worst hit due to travel bans and lockdowns. Initial demand shock is worse than 9/11 and the 2008 Financial Crisis combined (by up to 5 to 6 times) with ~70-80% near-term demand erosion. The summer travel peak season for the northern hemisphere has been deeply impacted.

In Japan, both international & domestic tourists have declined drastically, and the Olympic Games have been postponed. This follows the sales tax hike last year and diminishing South Korean visitors, the second-largest contingent of tourists to Japan. The number of foreign visitors to Japan tumbled 93% in March from a year earlier, marking the biggest rate of decline ever. Visitors from China, accounting for the largest portion of the total number of tourists to Japan, have reduced by 98.5%. Consequently, travel, tourism and hospitality companies are facing financial difficulties. Japan’s biggest airline, ANA, is seeking loans and plans to furlough 5,000 cabin crew. More than 3,800 firms have taken measures to reduce their workforce or are considering doing so. STR has reported that over 40% of the hotels in the Asia Pacific have closed. Unemployment has increased with large hotel chains laying off people while smaller ones are running out of cash. Hotel sales have contracted by more than 50% across Japan while occupancy has fallen by 40% across all kinds of hotels, ryokans, B&Bs and guest houses. Japan has had 23 coronavirus-linked bankruptcies of which 10 are tourism companies and 6 food & restaurant companies. 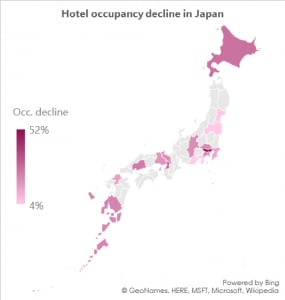 In these difficult times, OYO has taken several measures to ensure health, safety and business continuity while contributing to the community at large. Employees have been advised to ‘Work from Home’, A task force has been set up in every market to continuously monitor health-related situations, and 200K masks have been procured. Remote operations have been established to support asset partners and personalized calls are being made to share information about combat measures. Training is being provided to asset partners and staff on how to check for and handle guests with a suspected case.

OYO Japan has implemented #CareforCare, an initiative to support healthcare workers in terms of accommodation. Medical professionals can avail free accommodation at an OYO hotel close to their place of work so that they can rest just like their second private room with peace of mind. Discounted hotel rooms are also available to foreign nationals who have difficulty going back home. They can avail these discounts and find out more details through their foreign embassies in Japan. Similar measures are also in place in the US, UK, Philippines, India, and Malaysia.

At the same time, OYO Japan is working to minimize the top-line impact on asset partners. Pricing algorithms have been modified to negate the impact of fall in traffic and aggressive property level campaigns on third party distribution channels have been initiated to protect market share. A referral campaign which is currently underway and is being promoted in the media to attract new customers to OYO properties is increasingly gaining traction. Marketing spend has also been optimized to focus on localities which continue to see footfall. As a result of these measures, occupancy has not dropped further, and OYO is able to ensure basic level sustenance for asset partners.

However, like all other players in the hotel business, OYO is also not immune to the crisis. Across the globe, in the countries it operates in, OYO is facing the financial burden of falling revenues as booking trends continue to decline and cancellations increase. Ritesh Agarwal, OYO founder and CEO, has foregone 100% of his salary for the rest of the year and the executive leadership have taken a cut of up to 50%, there is a lot more to be done to ensure long term sustenance and success of the company. We are also doing all we can to reduce controllable costs.

With similar conditions in Japan, OYO’s operations have been stressed, impeding its ability to pay the assured benchmark revenues which are intricately linked with business performance and are not designed to sustain the onslaught of an unforeseen, uncontrollable natural force in operation like the COVID-19 crisis. Nonetheless, OYO maintained its promise and paid assured benchmark revenues in March, despite the significant financial burden it entailed. Starting April, OYO reached out to its hotel partners to discuss the severity of the situation. Following due discussions and after taking their suggestions, OYO has decided to suspend assured benchmark payments. However, to help hotel partners to tide over the current crisis, OYO has also extended stimulus in the form of an upfront payment of a part of the assured benchmark revenues in selective cases to struggling asset partners who might need it.

Hotel partners, being cognizant of the extraordinary nature of the current situation, have been extremely supportive of OYO’s actions and appreciate the business continuity that the company is providing. At the same time, given the monumental shift in the business environment after the COVID-19 crisis and postponement of Olympics, OYO and its hotel partners acknowledge that a post-COVID world will require new conditions of doing business. Recognizing this, more than 50% of hotel partners, while availing the stimulus package, have also agreed to move to revenue sharing contracts, which are mutually beneficial to both parties. Advanced cordial discussions are ongoing with remaining partners, and we hope to get their support, as well.

Hotel partners continue to see the value that OYO is creating by working closely with them and utilizing its proprietary AI-powered algorithms. OYO Hotels Japan is thankful to its partners for their patience and understanding during this tough time and appreciates the cooperation they are lending in the spirit of true partnership.

Elsewhere, OYO has also undertaken an initiative to support Japan’s small hotel owners through a program called OYO Partner support program. The $2m program provides working capital support in order to avoid going out of business and is an attempt to protect the struggling hospitality sector.

OYO Hotels Japan remains optimistic that the Japanese hotel industry will emerge stronger and more spirited than ever before outside of this crisis.

Prasun is an OYO founding member who has successfully launched several global OYO businesses. In his capacity as an operating partner, Prasun heads our Japan Businesses. Weddingz.in sees 40% demand of pre-COVID levels since Unlock 3.0; highlights rise in customer intent & confidence for weddings in the latter half of 2020