Places To Visit In Kurukshetra – Land Of Bhagavat Gita 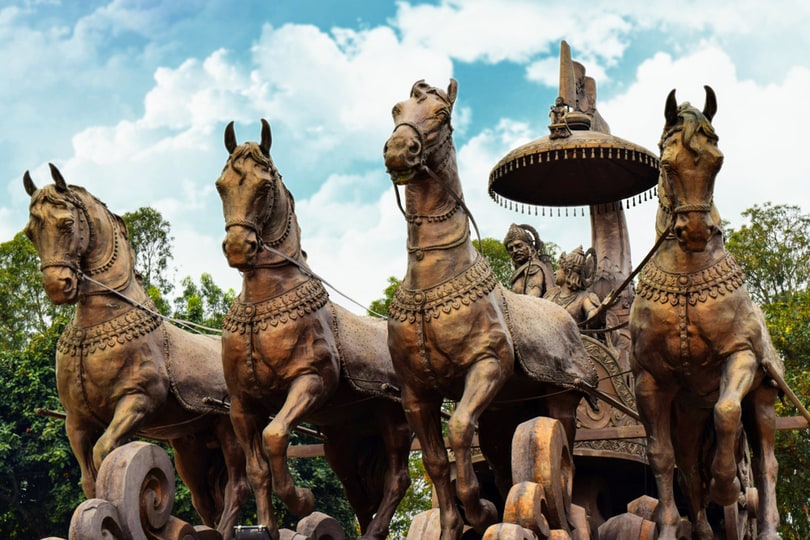 India is one of the most diverse countries in the world as people from different religions, cultures, and traditions come together to make this a secular country. It is estimated that close to 150 languages are spoken in the country which are sub-divided into five hundred dialects. Such is the heterogeneity of the country, a country blessed with majestic landscapes where the Himalayas guard the northern borders, the oceans mark the Southern borders as their own, the east is patrolled by the majestic mangroves of the Sundarbans, and the west is home to the great Thar desert.

India is a dream destination for architecture enthusiasts, the reigns of prolific empires have left their footprints in the forts and monuments they erected, like the Rajputs and the Mughals, to name a few. The nation has a rich history as it is the birthplace of the oldest known civilization to man, the Indus Valley Civilization. From art to literature, India has produced some of the finest pieces of work which every travel enthusiast must explore first hand.

One of the most popular tourist attractions in India is the iconic city of Kurukshetra. The city located in Haryana, is visited by millions of Hindu devotees because the state is known as land of the Bhagwad Gita. The war of Kurukshetra has been elaborated in the story of Mahabharata. This is one of the reasons why people all around the globe travel to this state, to witness the historical attractions around the city.

What to Expect When Travelling to Kurukshetra?

The locals of Kurukshetra are extremely welcoming as they believe in the age-old saying of “Atithi Devo Bhava” [Guest is the representation of God]. There are innumerable places to visit in Kurukshetra which can be enjoyed by people of different age groups. If you are craving a peaceful holiday with your friends and family members, then you must consider Kurukshetra. You can expect lush green fields, large freshwater lakes, and of course, historical monuments. The local cuisines will also satisfy your taste buds as the uniquely prepared regional dishes are one of a kind.

If you are heading to the city for the first time, then the following tourist places in Kurukshetra must be visited.

Top 5 Places to Visit in Kurukshetra:

Jyotisar is regarded as one of the most sacred tirthas present in the city of Kurukshetra. The devotees believe that Jyotisar is the birthplace of the Bhagavad Gita. It is here where the battle of Mahabharat commenced as the great warrior Arjuna received the word of God in the form of the Gita from his mentor Lord Krishna [The reincarnation of Lord Vishnu]. Jyotisar was first identified by philosopher Adi Sankaracharya back in the 9th Century.

In 1850 the King of Kashmir built a temple in honour of Lord Shiva. To educate the tourists on the historical significance of Jyotisar, a light show is organized where people are taught the ancient history of Kurukshetra. So if you are unsure of the best Kurukshetra places to visit then you can start your tour from Jyotisar.

Dedicated to Lord Brahma, this landmark is a manmade reservoir where devotees take a bath in the holy waters of the lake. People from all over the country visit the Brahma Sarovar especially during Solar Eclipse. It is believed that a dip in the holy water of this reservoir during an eclipse can cleanse one of all sins. According to legends, it is believed that King Kuru was the person who discovered the location of Brahma Sarovar.  It has a direct connection with the Mahabharata as King Kuru is an ancestor of the Pandavas and Kauravas. A tower stands tall in the middle of the lake as a symbol of victory in the battle of Mahabharata which was, supposedly, erected by Yudhistar. Tourists can also visit the shrine of Lord Shiva which is built on the northern banks of the lake.

The best time to visit Brahma Sarovar would be in the months of November and December as thousands of Hindu devotees come together to celebrate the Gita Jayanti festival. It is a popular belief among devotees that a single visit to Brahma Sarovar is akin to a visit to all the religious locations of Kurukshetra. Considered to be one of the best Kurukshetra famous places, it is a must-visit for all tourists.

The Mughals ruled India for almost 180 years which covers a large portion of our history. The influence of the culture can be felt in the lifestyle of modern India. Numerous forts and monuments were constructed in the country under the supervision of the Mughal emperors. One such collection of buildings are the Kos Minars, distributed in 49 different locations across Kurukshetra. The pillars represent the diversity of India. Famous as a Hindu pilgrimage site, the Kos Minars stand tall and proud as a representation of the mughal finesse.

Back in the 16th Century, Kos Minars were built for the purposes of communication within the Mughal Empire. There are many Minars located all over the country; they can even be found in some parts of Pakistan. The pillars are 9 meters in height and are distinctly designed. A visit to these ancient architectural marvels will definitely take you back to 16th Century India. This is why these pillars are considered to be among the top places to see in Kurukshetra.

This monument is the resting place of well renowned Mughal scholar, Sheikh Chilli. Dara Shikoh, the eldest son of the 5th Mughal emperor Shah Jahan was a disciple of Sheikh Chilli. The structure has two tombs and is surrounded by lush green fields all around. Inside the monument, there is a wonderful garden where tourists can spend time with their family members.

The monument also has a museum which displays some ancient artefacts and possessions of Sheikh Chilli. Tourists get a glimpse of the various ornaments, weapons, and manuscripts of 16th Century India. This sandstone monument is a testament to Mughal architecture. A trademark dome is built out of marbles which gives the landscape an elegant appearance.

The second tomb is the resting place of the Sheikh’s wife, made out of marble as well with a majestic floral design. This particular tourist attraction is criminally underrated which is a travesty. But a blessing in disguise as tourists can peacefully admire the beauty of the place without being shoved and pushed by an overly eager crowd. People can also enjoy the serene sunset from the highest point of the monument. A must-visit if you are in Kurukshetra, for the first or the umpteenth time.

If you are interested in learning about the battle of Mahabharat, then the Kurukshetra Panorama and Science Centre should not be missed. The unique thing about this science centre is that it appears to have combined science with mythology. Here the epic story is recreated with modern panorama effects and every event that took place in the war is explained scientifically. The science centre celebrates advancements in the field and also pays homage to the discoveries that have taken place in India, from arithmetic achievements to the advancements in the field of medicine.

The cylindrical building has been designed to perfection and is surrounded by gardens on all sides. The main hall contains various panorama paintings which are approximately 34-feet in height illustrating the chief events that took place in the battle of Kurukshetra. A magnificent ambience is created with the help of lights that add to the overall atmosphere. A must-visit for all the devotees and history lovers as the experience will educate you in more ways than one. People of all ages, especially children can visit this location and learn a lot about Indian culture and its contributions.

These are some of the most popular places to visit in Kurukshetra. The city has a lot of historical significance and must be explored by every travel enthusiast. If you are planning a trip to Kurukshetra, then make sure to stay at the location for a substantial time to visit all the archaeological and heritage wonders which should not be haphazardly covered in a single day.