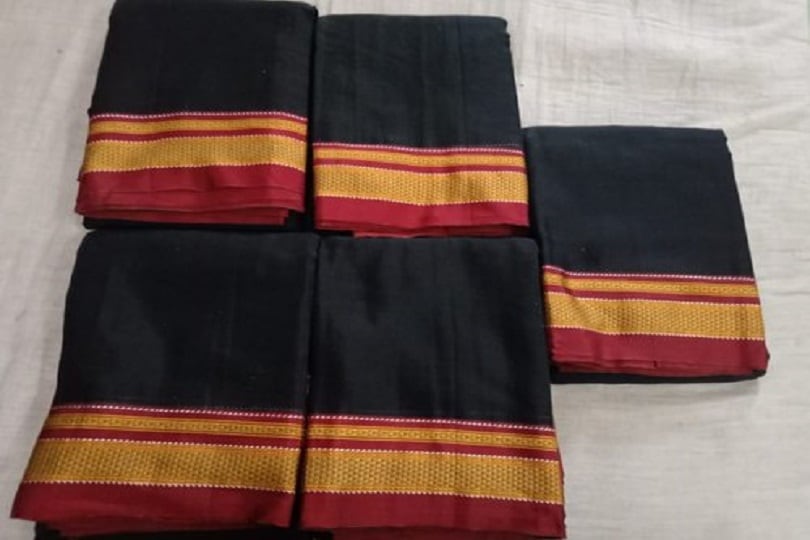 Ilkal is a sleepy little town in the Bagalkot district of the Indian state of Karnataka. It is situated in a valley located in the southeastern corner of the Bagalkot district. This town is known for its Ilkal sarees, which quite evidently have been named after the town. Ilkal is a traditional form of Indian saree that is woven using cotton warp on the body and art silk warp for both the border and pallu portion of the saree. Sometimes, instead of art silk, pure silk is also used. The saree’s distinctive quality lies in its combining of body warp with the pallu warp. This technique is locally called Tope Teni. It is used exclusively at Ilkal. The main body of the saree contains designs such as stripes, rectangles, and squares. Sometimes the main body is also left plain.

Ilkal is a small town in the beautiful Indian state of Karnataka. This place experiences scorching summers but the winters here are cool and pleasant. Ilkal was an ancient weaving center, where the art of weaving dates as far back as the 8th century AD. The popularity of these sarees is attributed to the patronage provided by the local chieftains in and around the town of Bellary. The raw materials required for weaving these sarees were readily available in this area, hence it led to the growth in the production of these sarees. The vibrant colors, beautiful patterns, and elegant look of these sarees have made them popular all over the country. Currently, more than 20000 people living in Ilkal are involved in the art of saree-weaving.

The distinctive feature of Ilkal sarees is the use of a form of embroidery called Kasuti. The designs used in Kasuti feature unique patterns like palanquins, elephants, and lotuses which are embroidered onto Ilkal sarees in Kasuti style. Kasuti is a traditional form of folk embroidery that is practiced mainly in Karnataka. The work is quite intricate and involves putting up to 5,000 stitches by hand and is traditionally made on dress wear like Ilkal sarees. The history of this embroidery dates back to the period when the Chalukya dynasty was dominant. The name Kasuti is derived from the words Kai that means hand and Sui that means cotton. It indicates that Kasuti is a form of embroidery that is done by hand using cotton. The Kasuti embroidery features folk designs influenced by rangoli patterns of Karnataka, mirror work embroidery and gold & silver thread embroidery were mostly used for special occasions like weddings. In Karnataka, brides traditionally wear sarees embroidered with Kasuti on their wedding day.

While the main body of the Ilkal saree usually carries simple patterns, it is the pallu that is the showstopper. It features designs of temple towers, palanquins, elephants, and lotuses that indicate the lasting royal influence on the art of Ilkal. The pallu is usually made of red silk and has white patterns. The main highlight of this saree is the border, which is about 4 to 6 inches broad. The Pallu features a contrasting color, giving the saree an extremely appealing look. The colors traditionally used are pomegranate red, brilliant peacock green, and parrot green. The sarees that are made for bridal wear are made of a particular color called Giri Kumkum which is associated with the sindhoor worn by the wives of the priests in this region.

Ilkal saree weaving is found mainly in and around the villages of Kolhar, Ilkal, Kamatgi and Nidagundi located at the Bijapur district of Karnataka. As mentioned above, the specialty of these sarees lies in the pallu, which is usually woven in red and white. The sarees, on the other hand, feature vivid colors such as dark indigo, purple, red and green with their traditional styles of pallus. The pallu and the body are joined using a technique called kondi. Other features are the traditional patterns with motifs of centipedes, dots, and triangles.

Ilkal traditional sarees are produced mainly on pit looms. Mainly three types of designs are woven in the borders – these are Gomi, more popularly known as Ilkal dadi, Paraspet, and Gaadi. Weaving a beautiful Ilkal saree takes about three to seven days, based on the design and pattern. The uniqueness of this saree lies in the use of a local Topi Teni technique, in which the body warp is joined with pallu warp with a series of loops. This is a pretty complicated process, the result of which is a beautifully done saree. Ilkals come in plain as well as chequered styles. Even for the chequered ones, depending on the size of the checks there are different names assigned.

The quaint town of Ilkal gets its name from the Kannada word lakallu, which means slope. Ilkal is surrounded by flat surfaces and small hills in certain directions that have abundant reserves of granite stones. The town, besides its sarees, is famous for its pink granite, which is exported all over the world. The majority of the soil found here is the rich, fertile black soil with a semi-arid region type.

Ilkal is a hub of trade, commerce, and industry. Its pink granite stone is exported all around the globe, and it is specifically known for its traditional Ilkal sarees. These sarees are predominantly worn by the women of Karnataka, Maharashtra, and Andhra Pradesh, though now their popularity has transcended the geographical barriers, and you can see women sporting these sarees in every corner of India and even globally.

If you happen to find yourself in Karnataka, then you should purchase the Ilkal Saree. It is not just a piece of garment, it is a thousand-year-old tradition woven together with love!

Places to Visit in Ilkal

Ilkal, situated in scenic Karnataka, is known for granite and Ilkal sarees. But it lies dotted with scenic attractions featuring the best of history, culture, and nature.

Some of the best places to visit in Ilkal are-

Situated in Bagalkot, around 58km from Ilkal, Badami was formerly known as Vatapi. This city is an archaeological delight owing to its beautifully crafted red sandstone temples and fortresses. It is nestled in a valley of red sandstone and surrounds the pristine Agastya Lake.

Badami once served as the royal capital of the Chalukyas and is home to several examples of Dravidian architecture which amalgamates both south and north Indian style of architecture. It is the center of ancient Chalukyan glory and has a cave temple dedicated to Lord Vishnu. This temple is the largest of its kind in the entire country. The lake beneath the cave temples is named after the Bhutanatha temples in Badami. All the structures here are made from sandstone. These structures standing proud under the clear blue Badami skies provide a treat to the eyes.

At a distance of just 39km from Ilkal, lies Pattadakal, a testament to the architectural prowess of the Chalukya Dynasty. There are 10 major temples in Pattadakal, all dedicated to Lord Shiva. Pattadakal is a UNESCO World Heritage Site and is managed by the Archaeological Survey of India. UNESCO has described Pattadakal as “a harmonious blend of architectural forms from northern and southern India” and an example of “eclectic art” at its height. The Hindu temples here are generally dedicated to Shiva but they also feature varied elements of Vaishnavism and Shaktism theology. One of the masterpieces here is the Virupaksha temple, which was previously called the Lokeswara Temple. It is the largest temple in Pattadakal and was built by Queen Lokamahadevi in the 8th century to commemorate the victory of her husband Vikramaditya II over the Pallavas. The beautiful Virupaksha Temple lies embellished with intricate carvings and inscriptions. The temple is home to enchanting sculptures of Hindu Gods and Goddesses, and the inscriptions adorning the temple reveal that King Vikramaditya had employed an architect and a team of sculptors from the South to express his admiration for the art of the Pallavas.

There is a Jain Temple in Pattadakal, which is the only Jain temple in the region. It is built in the traditional Dravidian style. It dates back to the 9th century and has immense religious and historical significance.

At a distance of 35km from Ilkal lies Aihole, which once served as the capital of the Chalukya Dynasty. It is a city with a rich and illustrious history. Aihole is an epicentre of Hinduism and has 125 temples dotted all around it. This city is an archaeologist’s delight with several temples dating back to Chalukyan times. The Durga Temple at Aihole is one of the most elaborately decorated monuments in the city. It is named after the word ‘Durg’, which means fort, and not Goddess Durga, which is a common misconception. The temple exhibits a distinctive Dravidian style of architecture with exquisite carvings adorning the columns at the entrance. Other important monuments here are Lad Khan Temple, Meguti Temple, Ravanpadhi Cave, Huchhimalli Temple, and Gowda Temple.

Ilkal is a beautiful, laid-back town, with an elaborate history of sari weaving. It is a perfect place for those who are looking to purchase intricately crafted saris. So next time you want to indulge in some traditional Indian sari shopping, then Ilkal is the right getaway for you.