The Most Famous Temples In Rajasthan You Must Visit

Rajasthan, the land of the Rajas (kings) is one of the most sought after tourist destinations in India. Magnificent forts, palaces, and opulent living are the signatures of this beautiful state. All across the state there are forgotten forts and timeless palaces, which have been beautifully restored and are the famous tourist attractions of India. Explore these palaces the royal way with an elephant or a camel ride and rejoice to experience the kingly life. In addition, the fine arts and handicrafts definitely add to the appeal of Rajasthan. Developed and nurtured by the kings and rulers of different periods, there is a distinct charm of this desert state of India. Plus, the religious sites here add a spiritual and serene vibe.

Exploring temples is a great way to find out more about Rajasthan’s culture and heritage. You will also get to know about local beliefs, customs and traditions, this way. So, let’s take a tour of these temples and experience their charm and uniqueness.

Top 10 Temples To Visit In Rajasthan

The Jagatpita Brahma temple is situated close to the pious Pushkar Lake and is dedicated to Lord Brahma. It is believed to be a 2000-year-old temple and is a sacred place for Hindus. Devotees come here from across the country and first, take a holy dip in the Pushkar Lake and then offer prayers at the temple. This temple is made of marble and stone slabs.

If you can, then try visiting this temple during Kartika Poornima. It is a grand affair and celebrated with much enthusiasm in the honour of Lord Brahma.

There is a spiritual side of Pushkar and you can feel these vibes in the air. You will find a lot of yoga ashrams here. A lot of foreign tourists also visit Pushkar. It is tourist season almost throughout the year. 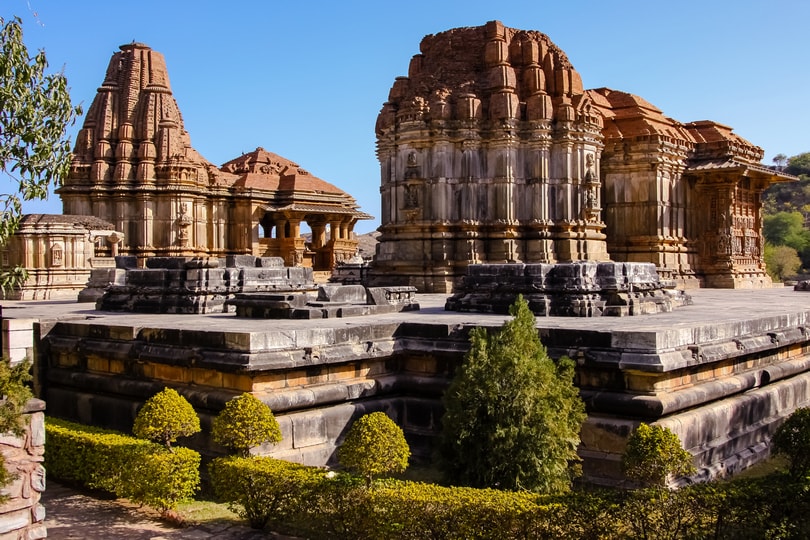 This temple is one of the major religious sites and was built in 734 AD and has 108 temples within its premises. It is a famous temple among Hindu pilgrims who visit it every Monday and offer prayers to Lord Shiva. One of the primary temples, it has a four-faced image of Lord Shiva. Other than a Monday, if possible, try visiting this temple during Mahashivratri. The place is crowded but worth a visit.

The temple architecture is truly unique. It is a double storied one with a pyramid style roof and carved tower. In the main temple, there is a huge pillared hall and has a heavy pyramidal roof.

The temple was established by Bappa Rawal and Eklingji is the ruling idol of the Mewar rulers. As soon as you enter the temple, you will notice a beautiful silver image of Nandi. There are also two images of Nandi that have been carved out of black stone and brass. Even the image of Lord Shiva is carved from black marble and is at the height of around 50 feet. The four images of Shiva depict four different forms. Moreover, adding to the attraction is the silver snake adorning the Shivalinga. The Ambika Mata temple has also been preserved by the State Department of Archaeology and Museum of Rajasthan. It has a pentagonal shape and a huge rampart wall in the surroundings. The architecture of this temple is totally distinct from a north Indian or even a Rajasthani temple.

It is worth visiting during Navratri. The 9 days dedicated to Goddess Durga are celebrated here with much vigour. In fact, every Durga festival and puja takes place in this temple. So, you should come here for the religious aspect, the archaeology and sculptures. The temple is among the unique religious sites in Rajasthan, dedicated to Karni Mata and is located at Deshnoke, which is nearly 30 km from Bikaner. The unique thing about this temple is that there are nearly 20,000 rats living in this temple and are revered. The rats are called Kabbas and are worshipped. The offerings which the devotees make here are eaten by rats and are then given as prasadam.

According to legends, this temple was made in the 1400s. The goddess worshipped here is also an incarnation of goddess Durga. There is also a story around the presence and worshipping of rats in this temple. It is believed that Karni Mata had asked the god of death Yama to reincarnate the son of a grief-stricken storyteller. However, when Yama refused to help, Karni Mata promised all the male storytellers that the members of the Charan caste will be reincarnated as rats in her temple.

Some of the festivals that are celebrated here include Karni Mata fair, Chaitra and Ashvin Shukla Dashmi. It is best to visit this temple during the time of these festivals. There is a completely different feel about it.

The Salasar Balaji temple is dedicated to Lord Hanuman. It is located in Salasar in Churu district of Rajasthan. As it is among the famous religious sites, it receives a lot of devotees every day. This ancient temple was made in 1754 AD and there is an idol of Lord Balaji, the incarnation of Lord Hanuman. There are different pujas and offerings that happen in this temple throughout the day.

The best time to visit this temple is during the Chaitra and Ashwin Purnimas. These are two big festivals, which are celebrated with much enthusiasm.

After visiting this temple, there are a few more temples in the proximity that one can cover. For instance, you can check out the temple of Anjana Mata and Mohan Mandir.

This temple is also dedicated to Lord Hanuman. It is in Karauli district and is known for having healing powers. The belief is that this temple can help in the exorcism of evil spirits. It is quite famous not only in Rajasthan but across the country. However, you should be a little cautious when going to this temple, unless, if you are planning to go for ritualistic healing. The site at this temple can actually be disturbing for small kids.

If you are planning to visit this temple, then go during the Chaitra Purnima and Hanuman Jayanti. These are two popular festivals, which are celebrated here. Additionally, you should know that this temple remains crowded owing to its popularity across the country.

When visiting Rajasthan, if you wish to see a replica of Shirdi Sai Baba temple, then you should definitely visit this temple. It is located in a place called Rani in Pali district of Rajasthan. The temple is considered as a powerful one in the entire Marwar belt.

There is a Sai Baba idol in this temple, which looks exactly the same as the one in Shirdi. It is also made of white marble and is 5.5 feet tall. If you visit on a Thursday, you can expect a huge crowd. In fact, every Thursday there is a havan that takes place in the temple. The havan is performed by Vedic masters and they chant special mantras. This is a relatively new temple and has been built by the Birla Group of Industries in 1988. It is constructed on a slightly elevated ground near another famous temple, i.e. the Moti Dungari temple. Actually, this temple is built on the base of Moti Dungari hill.

The temple looks spectacular both during the day time and in the evening when it is all lit-up. Like the other Birla Mandirs, this one is also dedicated to Lord Vishnu and Goddess Lakshmi. This temple has three huge domes, a big green garden and there are mythological events carved on the walls of this temple.

Other than Goddess Lakshmi and Lord Vishnu, there are idols of various other saints, philosophers and historical achievers. The best time to visit this temple is during Navratri and Diwali.

Along with Birla mandir, you should try to cover the Moti Dungari temple which is set on the Moti Dungari hill. The presiding deity here is Lord Ganesha and the idol in the temple is believed to be 500 years old. This temple was built in 1761 under the supervision of Seth Jai Ram Palliwal.

The architecture of the mandir reflects the Nagara style and is modelled like Scottish castles. There are three entrance gates that are made using limestone and marble.

There is also a Shiva lingam inside this temple complex. However, it is open for devotees only once a year during Mahashivratri. Besides, every Wednesday, there is a big fair organised in the temple complex.

One of the most famous religious sites in Rajasthan, it sees almost 1.25 lakh devotees every year. Even renowned politicians and business tycoons visit this temple. This temple is located around 10 km from Jaipur and is an old one. There are several temples here and a sacred water tank where devotees take a holy dip. In this temple complex, there are temples dedicated to Lord Balaji and Lord Surya (the Sun God). There is also the temple of Ramgopalji. It is also known as the monkey temple and there are tribes of monkeys living in it. The most popular festival celebrated in this temple is that of Makar Sankranti. So, it is worth visiting here during that time of the year.

The list of religious sites in Rajasthan mentioned above includes some of the most popular and pious ones. When you visit these temples, you will learn a lot more about the people of Rajasthan and their rich culture. The design and architecture are also typical of this state and the best part is the restoration. Even the ancient temples have been beautifully restored, making a visit absolutely worth it. So, if a spiritual trip to Rajasthan is on your mind, then the above list will come in useful for preparing the itinerary.

9 least-explored tourist attractions in rishikesh for a quiet summer holiday-May,06,2021

8 vibrant temples in vrindavan to visit during holi-May,06,2021

Witness kaleidoscopic holi celebrations in india at these 8 places-May,06,2021

Adventure holidays – 8 hill stations every backpacker should explore this summer-Mar,23,2021