Places to visit in Lansdowne – Unexplored Haven in the Himalayas

Places to visit in Lansdowne – Unexplored Haven in the Himalayas

Unlike many other famous hill stations, Lansdowne is known for its quiet and its serenity. From colonial-era buildings that seem to have frozen in time to sunrise and sunset points, temples and museums, Lansdowne is the quintessential small hill station. Enjoy and explore this slice of yet undiscovered hills in North India.

9 Best Places To Visit In Lansdowne

If you want a bird’s eye beauty of Lansdowne and the beauty of the mountains surrounding it, head to Tip-In-Top or Tiffin Top, which is one of the favourite tourist attractions in Lansdowne. Popularly known as Tiffin Top, the hilltop is at a height of 2000metres above sea level and provides spectacular views of the Trishul and Chaukhamba Mountain Peaks of the Himalayas. This is an ideal picnic spot and a popular getaway for spending time with family and friends. Vehicles can’t go right up to the hilltop hence, you will need to leave your vehicles some 200 meters away from the top.
People are especially drawn to the sight of the setting sun from a point known as the Sunset View Point, which is en route to Tiffin Top. This point is also known as Snow View because of the breath-taking views that it offers of the snow-covered mountain peaks in the winter.

Tip-In-Top lies at a distance of 2.5 kilometers from the Lansdowne market.

One of the must-visit places to see in Lansdowne is the Darwan Singh Regimental Museum popularly known as the Garhwal Regimental Museum. The museum houses memorabilia belonging to the Garhwal Rifles.
Darwan Singh was a Naik in the First Battalion of the 39th Garhwal Rifles in the British Army during the First World War. For his gallantry and exceptional performance in battle, he was awarded the Victoria’s Cross.

The museum was established in 1983 to honour the memory of this brave soldier. This is a two-story building that has among other things portraits from battle scenes of pre and post-Independence India, photos of soldiers, uniforms, medals, war trophies, and documents of appreciation. There is also a beautiful flower garden outside the museum where you can walk or sit.

Another tourist attraction that is just 2 kilometers from the Lansdowne Bus Stand, the Bhulla Tal is a man-made lake created and maintained by the Indian Army. The youth of Garhwal had helped the army to create this lake and thus this is dedicated to the youth of the area. The name of the lake reflects this as the word ‘Bhulla’ in Garhwali means ‘younger brother’. The serene atmosphere of the lake makes it an ideal place for a picnic.

Understandably, due to regular maintenance by the Indian Army, the surroundings of the lake are spotlessly clean. Apart from being a picnic spot, the lake offers boating facilities in boats that are in the shape of ducks. There is also a small bridge over the lake that offers another view of the lake to the visitors. There is a small café, souvenir shop, a nursery for herbal plants, and enclosure for rabbits too in the area near the lake.

As mentioned earlier, Lansdowne has its fair share of temples. One of the most famous among them is the Tarkeshwar Mahadev Temple in the PauriGarhwal district of Uttarakhand. This temple is one of the most popular places to see in Lansdowne.

Tarkeshwar Mahadev Temple is an ancient temple. This temple is at a height of 2092 meters above sea level and it is 37 kilometers away from Lansdowne.

Legend has it that the demon named Tarakasur was a devotee of Lord Shiva and he worshipped Lord Shiva at this place. Shiva was pleased with his devotion and gave him the boon of immortality. Soon Tarakasur started abusing his boon as he started killing sages and threatening the gods. Deeply disturbed by this, the gods went to Lord Shiva and asked for his help. Since Shiva had given the boon of immortality, he was also in a fix. However, he soon found a way to destroy Tarakasur. Shiva’s son Kartikeya killed Tarakasur but at the time of dying, Tarakasur prayed to Lord Shiva and asked for his forgiveness. Seeing this, Lord Shiva decided to attach Tarakasur’s name to the temple at the place where he used to worship him. Thus, the temple got its name of Tarkeshwar Mahadev.

The main deity in the temple is that of Lord Shiva in the form of an idol of Shiva performing his Tandava dance. The temple is surrounded by thick forests of deodar, cedar, and pine trees.

Devotees are supposed to take a bath in the ponds in the temple before entering the inner sanctum. Men can bathe in open pools while ladies have closed pools. Mahashivratri is the main festival here and the temple comes alive on this day. There is a ritual here of offering bells to Shiva on occasions such as the birth of a baby or a wedding in the family. Usually, this is a half day trip from Lansdowne but those tourists who want to stay back here are welcome to do so at the two Dharamshalas near the temple.

The Garhwali Mess is a heritage building that is one of the most visited tourist attractions in Lansdowne. This building was constructed by the British in 1888. Although the name has stuck, the building is today a museum that consists of antiques, animal skins, and hunting trophies. One of the unique attractions here is a directional dial that consists of symbolic arrows pointing out the route towards Nandadevi, Chaukhamba, Kamet, and other peaks of the Himalayan range.

The only functional church in Lansdowne, this church was established in 1936. The church opened its doors to the faithful in the year 1937. Post-independence the church was in a state of abandonment till 1951. Even after this, the church was not being used for prayers till 1983 when it was finally reopened for prayers. The gorgeous interiors and the beautiful surroundings near the church attracts devotees and tourists. The colonial architecture of the church is also another highlight and talking point among tourists.

The church is open between 8:00 am and 5:00 pm. The church is 2 kilometers away from the Lansdowne Bus Stand.

St. Mary’s Church is an Anglican church that was built in 1895 and later converted into a museum in 1947. The stained window panes and the Victorian architecture of the church stand out for visitors.

The church is one of the best places to see in Lansdowne and is situated near the Tip-In-Top Hill Point. Worth noting here is the picture gallery and a 10-minute documentary that talks about the history of Lansdowne and the Garhwal Rifles. The museum is open only on weekends.

The Durga Devi Temple is another ancient temple that is situated at a distance of 28 kilometers from Lansdowne. The unique thing about this temple is that it is inside a cave and is dedicated to Goddess Durga. It is considered as one of the oldest Siddh Piths in the region and devotees believe that the Goddess grants their wishes. There is a practice of tying a red cloth in this temple and wishing for something.

The nearby surroundings are very picturesque. There are several small waterfalls and a small seasonal stream flows below the temple creating a lovely sight. Buses and cabs are available from Lansdowne to reach the temple.

This is another Shiva Temple that is an important place of worship for locals in Lansdowne. Due to the temple being maintained by the army, this temple is also popularly known as the Regimental Temple.

The Shiv Linga in this temple is said to be self-formed. The temple is believed to be more than 500 years old and there are many myths and legends surrounding the place. According to legend, on Mahashivratri, locals found their cows missing and later found them secreting milk on their own in the cave where the Shiv Linga is situated.

The Sage Kalun is also believed to have meditated here some 5000 years ago and this attests to the holy nature of the place. There are Samadhis of other sages, which have been built around the periphery of the temple.
The temple is at a distance of 1.5 kilometres from the Lansdowne Bus Stand and cabs are available to reach the place.

The best time to visit Lansdowne is throughout the year and the recommended period of stay is for two days. Lansdowne can be the perfect weekend getaway for you if you are in the Delhi–NCR region. If you are not, don’t let that stop you from visiting this relatively undiscovered hill station of North India. You will be free to explore a colonial fragment of India in relative ease without the hassle of crowds and hawkers to bother you. 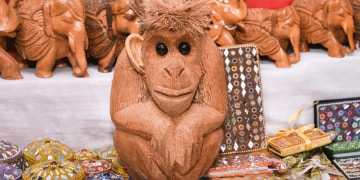