Western Times, a Gujarati daily, recently covered the story of our Ahmedabad-based hotel partner Sajjan Purohit. Sajjan, who has 8 hotels with OYO, talks about how OYO has helped small town hotel owners by bringing standardization and technology to them, and how they are benefiting from the company’s nationwide marketing campaigns. We are re-publishing the story below to let the hotel owners know how working with OYO can positively impact their business.

A Hotel Owner’s Story: How the OYO Association boosted my Business

His family first entered the industry through the food-and-beverages business. Soon, they began running hotels in Ahmedabad. The hotelier had moved from Rajasthan to Ahmedabad in 2003, wanting to do BBA. Later, he joined his father’s business and helped him in running the properties.

As a hotel owner from a small town, however, he faced many challenges in understanding and effectively using customer feedback. Additionally, during the past few years, there have been many technological changes, mostly around online marketing, sales and payments. Today, all these things can be done online.

But in a small town, there is little opportunity for small hoteliers to learn more about new and modern practices in customer service, staff skilling, marketing, etc. Each person has to learn new things on his own. In such a situation, a small hotelier feels completely alone and helpless since he lacks a real voice in the hospitality world even if he has the intention and will to make a difference.

It was in such a situation that Sajjan heard about OYO. This was when he learned about the technology and marketing benefits provided by OYO. He felt it would be a good idea to check this out and see whether it could really benefit them. After joining up, he has seen the OYO value first-hand and how the OYO team assists the hotel owner in identifying service gaps and providing training to the hotel staff so that better service can be offered to guests.

Sajjan now has eight of his hotel properties with OYO. Till date, he is extremely happy and satisfied with the partnership with OYO. The statistics tell their own story.

Before joining hands with OYO, none of his hotels was running online and the entire business remained restricted to walk-in customers. With OYO, everything changed. His hotels first received access to OYO apps and technology that helped in running the business more efficiently and smartly. His hotels also received more visibility on OYO platforms, such as the OYO app and website, making them available for customer bookings across the entire country.

On their own, Sajjan is clear his hotels would never have been able to reach so many people without spending a lot of money. Moreover, they would never have been able to understand and use the technology so quickly. It was OYO that helped them in understanding and employing technology so quickly. Having understood the importance of technology, the business has seen a tremendous growth after the partnership with OYO. Being listed on OYO platforms has increased the visibility of their hotels to such an extent that the occupancy rate has reached 85%.

Initially, his hotels had only been selling rooms to travellers seeking accommodation. But after partnering with OYO, he has understood the importance of standardization and how it helps in offering customers a complete experience. OYO also introduced them to the practice of clean, white, unstained bedsheets and bedcovers in the rooms, offering free Wi-Fi to guests and maintaining good service standards.

Today, Sajjan admits it is not only his hotel business that is growing with OYO but he and his team too are constantly learning new things about the hotel industry. OYO has trained his entire staff. Besides this, the Property Manager app and the Owner app allows them to have end-to-end control over daily functions of the hotels and in keeping a close watch on the cash generated.

Managing revenue is much easier now and for every action, there is a proper process in place. These systems and processes have helped his business in better utilizing their human resources. Without a doubt, this helps in reducing costs incurred in running the business and offering guests a great stay experience.

Finally, the average room occupancy rate of Sajjan’s hotels has doubled after he signed up with OYO. In fact, within a span of nine months, the occupancy rate of his hotels has touched 85% while the monthly revenue has grown by 400%. Sajjan now believes the OYO experience is the greatest thing to have happened to him as a hotel owner. 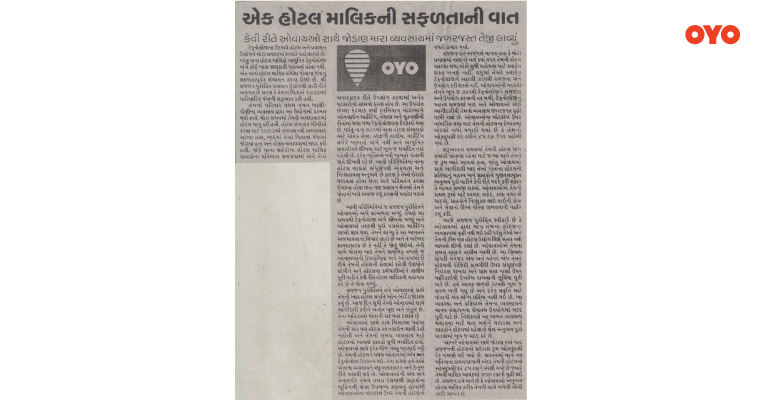