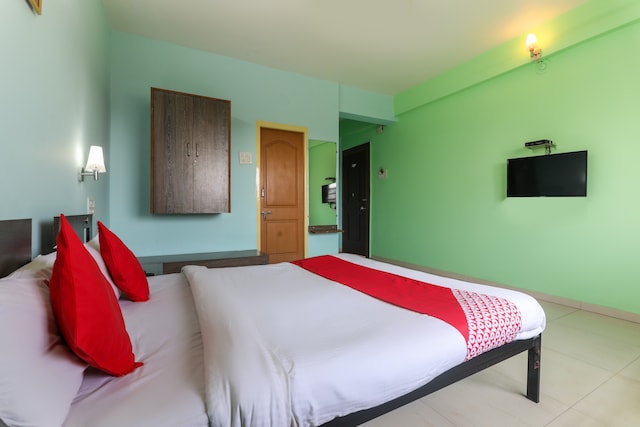 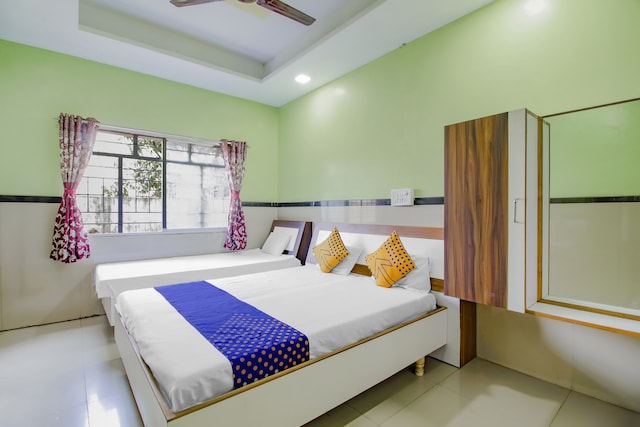 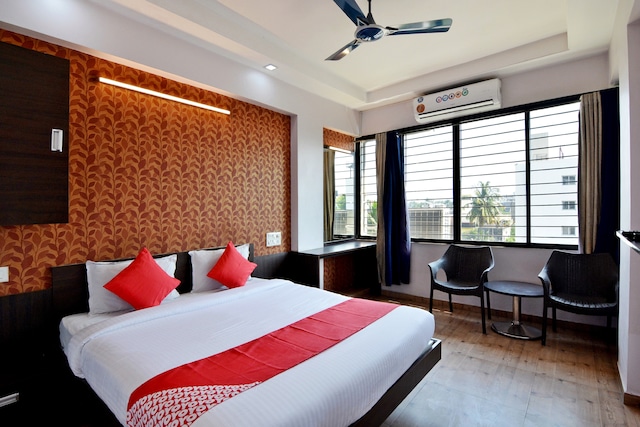 Near Bank of Baroda, Kadamwadi Road, Kolhapur· 1.1 km
Hurry, Only 1 room left!
3.8 (156 Ratings)·Good
TV
Parking Facility
AC
+ 6 more
WIZARD MEMBER
Sanitised b4 ur eyes
₹874₹166547% off
per room per night
Log in to unlock exclusive deals
Enjoy up to 15% extra discount on your bookings
Login

SPOT ON 62561 Soham Hotel And Lodging

Near Post Office, Shahuwadi, Kolhapur· 39.4 km
4.1 (15 Ratings)·Very Good
Parking Facility
Reception
CCTV Cameras
+ 4 more
WIZARD MEMBER
Sanitised b4 ur eyes
₹549₹139260% off
per room per night
Get access to exclusive deals
Only the best deals reach your inbox
Your email

Near Gokul Hotel, railway station road, Kolhapur· 0.9 km
4.2 (259 Ratings)·Very Good
Parking Facility
Free Wifi
Power backup
+ 16 more
WIZARD MEMBER
Sanitised b4 ur eyes
Sold Out
1
Kolhapur, the land of magnificent temples, is the religious pride of Maharashtra. Nestled in the tranquil laps of the Sahyadri mountain ranges, it is situated on the banks of the river Panchganga. Also termed as ‘Dakshin Kashi’, it is a historic Maratha city, with the Mahalakshmi Temple forming the focus.

Flushed with tourists all around the year, a city is equally famous for special Kolhapuri Misal and Kolhapur Rassa and many more mouthwatering delicacies. With a textile manufacturing sector, the city is widely known for the Kolhapuri Chappal, a handcrafted buffalo leather slipper which is worn by people throughout the country. Apart from this, Kolhapur is also known for hand block printing of textiles, silver jewellery, pottery, wood carving and lacquerware etc. Kolhapur attracts tourists from all over the country throughout the year. The famous tourist places here include the Mahalaxmi Temple which poses extraordinary and beautiful deity of Goddess Mahalaxmi, Rankala Lake which is one of the oldest lakes in Maharashtra, Chhatrapati Sahu Museum which is a combination of Jain, Gujarati and Rajwada style of architecture, Town Hall Museum where old sculptures, filigree work in sandalwood are displayed and Old Palace has a magnificent structure and hosts temple of Goddess Bhawani. Fort Panhala located on the outskirts of the city, offers truly magnificent views of the valley and Siddhagiri Gramjivan Museum depicting village life through wax statues are also places of tourist interest in Kolhapur.

While you visit Kolhapur, don’t miss on making reservations at the available budget hotels located in and around Kolhapur. OYO Rooms, India’s Largest Branded Network of Hotels offers a wide range of hotels in Kolhapur under two different categories like Budget and Premium. For the convenience of frequent travellers, there are various OYO hotels near Kolhapur Bus Stand. Apart from this, various budget hotels around Azad Chowk act as a perfect repose for travellers visiting the city to seek peace and tranquillity. OYO Rooms offers comfortable and budget hotels near Mahalaxmi Temple, making it convenient for travellers visiting the beautiful city to participate in the religious sanctity of the temple. OYO Premium hotels on Mahadwar Road provides exclusive deals for a pleasant and affordable accommodation where shopaholics can easily splurge at the markets nearby. Lose yourself in the serenity and charm of this hill station by staying a little longer at the OYO budget hotels in Kolhapur which offers long stay options to its guests. It is an ideal place for those who wish to take a break from the monotonous routine life and look forward to relaxing and rejuvenate themselves. Tourists who are visiting the city for work can stay conveniently at hotels near Kolhapur Railway Station which offers the best deal for a comfortable accommodation. Luxurious hotels with an array of services and amenities in Kolhapur add a cherry to the cake. Stay at OYO to avail the best of services and facilities to enhance your holiday experience.

: August
Gokul Asthami is celebrated to pay respect to Lord Krishna- a symbol of victory of good over evil. The day is marked by profound spiritual renewal and celebrations. In temples, the festivities commence before the break of dawn and continue past the dusk till midnight. Devotees hold large feasts, perform dance and drama, and decorate the idol of Lord Krishna in colorful altar. Kolhapur celebrates the day with extreme enthusiasm and zeal with a Dahi Handi ritual. Young men come together to form a human pyramid to break the high hanging handi as the crowd cheers on. This is a tribute to the childhood of Lord Krishna who was known to feast on butter. Partake in this lively celebration by booking an OYO in Kolhapur and gather an experience like never before.
Read MoreRead Less

Showing 1 - 10 of 10
1.
What is a good time to visit Kolhapur?
The best time to visit the city of Kolhapur is between October and March. The monsoons are heavy in Kolhapur and make sightseeing and other touristy tasks a little difficult. In winters, the weather is pleasant and ideal for plenty of outdoor time which you can spend in sightseeing, visiting temples and shopping in the streets of the city. Book hotels in Kolhapur with OYO Rooms to have a comfortable stay.
Read MoreRead Less
2.
What is there to do in the city?
Kolhapur is mostly identified by its world-famous Kolhapuri Chappal but there is more to it than that. It is a historical town and is currently an industrial centre in the state of Maharashtra. Some of its temples are famous landmarks and the local market is to die for. The travellers can have a great experience by visiting the Panhala Fort, the zoo and the Shivaji market. You can also go boating on the Rankala lake and enjoy the local spicy food. Find hotels in Kolhapur
Read MoreRead Less
3.
How to search for hotels in Kolhapur near station ?
For booking hotels near Kolhapur Railway station, you just need to search for 'Kolhapur Railway Station' under the 'Popular Localities' filter category. Then you can browse through a variety of options and book your pick as per your preference. View more hotels in Kolhapur
Read MoreRead Less
4.
What is the best food that you can eat here?
Kolhapuri cuisine is known for its spicy taste in both vegetarian and non-vegetarian preparations. The most popular dish in Kolhapur is the Veg Kolhapuri which is easily available at all the restaurant in the city. Other than that you have to try the popular chicken curry and mutton curry. Seafood preparations of Kolhapur are also quite famous, so give them a try too. Also try, tambada rassa, batata wada, pithala bhakri and Kolhapuri bhel.
Read MoreRead Less
5.
Is the city covered by metro/bus network? What is the best way to travel across the city?
There is no metro network in Kolhapur city. The city is well connected by the buses operated by Kolhapur Municipal Transport. These buses range from ordinary buses to luxury buses and provide for easy commutation in the town. Auto rickshaws are the most popular and in an expensive method to go around in the city and are easily available. There are also a number of companies that offer cabs and taxis for hire.
Read MoreRead Less
6.
Which are the famous temples of Kolhapur?
Kolhapur is well known for its Mahalaxmi temple but there are also many other temples that you should visit when you are here. Sri Ambabai Mandir, Jyotiba Temple, Gagangiri Maharaj Math, Laxmi Narayan Mandir
Read MoreRead Less
7.
Which are the unique items to buy in Kolhapur?
Kolhapuri chappals are probably the most popular things that you can buy in this city. You can buy them in various sizes and designs here and take home for your family and friends. Other than that you should buy Kolhapuri sarees, Kolhapuri Saaj and silverware. Kolhapuri artisans are extremely skilled in making jewellery, therefore, you can also consider purchasing the unique designs that are available in the Kolhapur. Kolhapuri maala, kakvi and Kolhapuri jaggery are also some unique items that you can buy here.
Read MoreRead Less
8.
How to reach Kolhapur?
Kolhapur can be reached by flight, train and road. The city has its own airport that receives flights from all the big cities of the country. It also has a railway station that has a good influx of trains from all over the country. Kolhapur is connected by top-class roads, so you can choose to drive here on your own or you can take a bus from the nearby big cities.
Read MoreRead Less
9.
How far is Hotel Pearl 011 from Mahalakshmi Temple kolhapur ?
Hotel Pearl 011 is around 4 kms away from Mahalakshmi Temple. It'll take around 10-15 minutes in an auto. You can also find buses. For more information, contact your OYO Captain.
Read MoreRead Less
10.
Do hotels in Kolhapur with conference rooms be booked online ?
If you want to hold a business meeting in goa, OYO offers a broad range of hotels hosting a conference room in the premises. You can find the best available conference room hotels by clicking the following link - https://www.oyorooms.com/hotels-in-kolhapur/with-conference-room/ . All the conference room hotels will get enlisted on your screen.
Read MoreRead Less
Download OYO app for exciting offers.
Download on theApp StoreGet it onGoogle Play
About UsTeams / CareersBlogsSupportOfficial OYO BlogInvestor RelationsOYO CircleOYO Frames
Terms and conditionsGuest PoliciesPrivacy PolicyResponsible DisclosureTrust And Safety
Feeling lucky? Try out a random OYO. Find OYO
Have Queries ? Call for any assistance on 070651 11128
OYO Townhouse
Your Friendly Neighbourhood Hotel
OYO SilverKey
Executive Stays
OYO HOME
Unlocking Homes
HOTELS BY CITY
Hotels near meHotels in GoaHotels in PuriHotels in MahabaleshwarHotels in OotyHotels in JaipurHotels in ShimlaHotels in ManaliHotels in UdaipurHotels in MussoorieHotels in PondicherryHotels in DelhiHotels in MumbaiHotels in NainitalHotels in LonavalaHotels in MunnarHotels in BangaloreHotels in MysoreHotels in DarjeelingHotels in Mount AbuHotels in KodaikanalHotels in HyderabadHotels in PuneHotels in ChandigarhHotels in ShirdiHotels in AgraHotels in GangtokHotels in CoorgHotels in ChennaiHotels in TirupatiHotels in DalhousieTravel GuideAll Cities HotelsCoupons
MOST POPULAR HOTELS
Hotels in HaridwarHotels in KolkataHotels in AhmedabadHotels in ShillongHotels in RishikeshHotels in VaranasiHotels in AlibaugHotels in MandarmaniHotels in SaputaraHotels in DamanHotels in OotyHotels in YercaudHotels in AmritsarHotels in MaduraiHotels in CoimbatoreHotels in KasauliHotels in DehradunHotels in DharamshalaHotels in GuwahatiHotels in LucknowHotels in McleodganjHotels in KatraHotels in Port BlairHotels in IndoreHotels in JaisalmerHotels in JodhpurHotels in PachmarhiHotels in VijayawadaHotels in TrivandrumHotels in Vizag
2013-2021 © Oravel Stays Private Limited